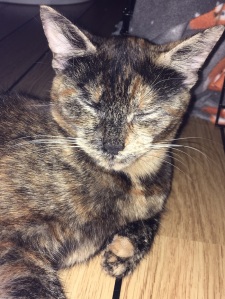 At a young age poor Ailbhe found herself living in a rather crowded multi cat house with several other unneutered cats.  Both she and the other female in the house became pregnant at the same time and gave birth within a few days of each other.  They shared the care of the 9 kittens they had between them.   As part of a bigger plan to manage the number of cats in the house and ensure all the cats were neutered, 8 Lives took in Ailbhe and 7 of the 9 kittens when they were 5 weeks old so Ailbhe has ended up caring for her own kittens plus several of the other cat’s kittens as well.  She’s done this beautifully and without complaint … but as they’re getting older she’s starting to think about her future and how to get her life back on track once they’ve flown the nest.

She’s a sweet, friendly little cat though a little shy as a result of the chaotic situaton she lived in previously.  We’ve chosen “not sure” in response to whether she’s ok with children.  I think she’d most likely be fine with sensible children who are able treat animals with respect.  She’s probably not the right cat for kids who are keen to have lots of interaction and paly time with a cat.  She’s been used to living in a multi cat household but again we’ve chosen “not sure” rather than a definite “yes” as its difficult to assess when mums are caring for kittens. 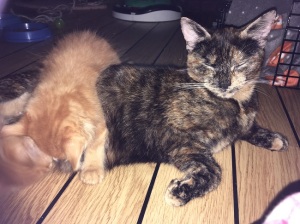 Ailbhe would probably fit happily into any home that could allow her a little space and time to recover from all she’s been through and find her feet (sorry … paws) again.  She’ll need to be kept securely indoors for at least a month following arrival at her new home.  After that she’d like to have a safe garden away from busy roads that she can potter around in.  We do strongly recommend that cats are kept indoors during hours of darkness for their own safety (and your peace of mind)

She’s had a health check this evening and all is well.  She’s due to be spayed, microchipped and vaccinated in the next few weeks, and will be ready to leave the kits early/mid June.

We always homecheck prior to adoption and ask a minimum adoption donation of £75 for an adult  cat. There’s more about our adoption process here: http://www.8livescatrescue.org/adoption-process.html and you’ll probably find more photos and stories about her and her kittens here: https://8livescatrescue.wordpress.com/ and here: https://www.facebook.com/8Lives/