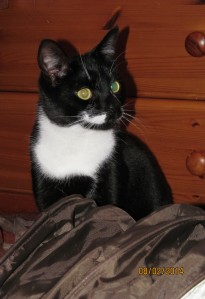 Merlin is an adorable young man, born August 2012.   He came into rescue when his family had a baby and then moved house and didn’t want to take him with them.  Poor lad was devastated and very anxious when he first arrived.   Although he gradually started to settle, it quickly became apparent that he was quite scared of other cats and hadn’t been used to being around them, so being in a cat rescue must have been his idea of hell on earth.  Thankfully we were able to find a fabulous foster home with two lovely adults, no kids and no other pets, and since then Merl has just gone from strength to strength.

Here’s what his foster mum says about him:

“Merlin is a young lively male who loves to be around people but also loves his space to retreat into. He has had a rough start and this sometimes materialises in an occasional lash out, but with no claws though, its more of a playful swipe than malicious intent.  He did hiss when he first arrived but this has now stopped and we now know where he likes to be touched and where he doesn’t so there is no reason for it to return hopefully.  We currently have his base primarily in one room but with the door constantly open so he can roam as he pleases but always has his own pad to go back to. He loves to be stroked and hugged by my 18 year old and he meows outside her room until she gives him attention! He does have a crazy half hour most days where he races around the house and burns off some energy. This is all good fun to watch and perfectly normal and to be expected for a cat this age.  He uses a scratching area very frequently and will need a good solid scratching post or board to keep him happy on that front! He is overall friendly and loving but does have a tendency to panic at loud noises or sudden movements. He needs a patient forever owner who will give him time to adjust and find his feet. In just a few days he has become a friendly adorable cat and in a few weeks with a new loving owner he will be a fantastic confident lively feline friend.” 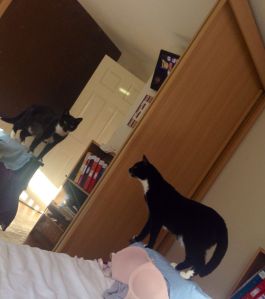 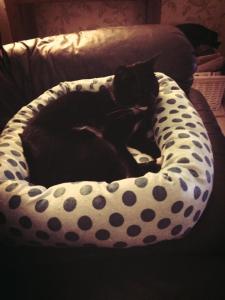 Merlin is neutered, vaccinated and microchipped. He’s been health checked and is up to date with flea and worm treatment. He’ll need an understanding home with no small children, and either no other pets or possibly an easy going, friendly other cat.  Ideally he’ll have a safe garden to explore once he’s settled and ready to go out.

We always home check prior to adoption, and as always, will continue to offer advice and support to his new humans as required.  Minimum adoption donation to be discussed.