Bulan & Bintang have lived in someone’s garden over the summer. We don’t know how they came to be there. They’re confident and friendly with people though, which leads us to think they grew up in a home and were later dumped, rather than being born outdoors. As the weather turned colder the person who’s garden they were in searched for rescue spaces and they came to us. 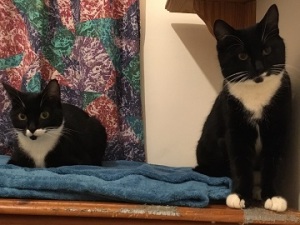 They’re both very playful and curious. Bintang tends to dive into things whilst his sister is a little more thoughtful and sensible. They’re both lovely little cats.

They’ve been for an initial health check at our vets and have started their vaccinations. Health checks revealed no issues and we think they’re less than a year old. We’re assuming they’re brother and sister since they’re so close and look very alike. They’re booked in to be neutered and microchipped on 7 December, and wlll be ready to go to a new home a week or so after that when they’re recovered from their ops. We’re aware it will be close to Christmas then. Unlike many rescues, we don’t close to adoptions over the holiday. If you have a quiet, home based Xmas planned then it might the purrfect time to adopt. Of course if its parties all the way then it would be best to wait while January. 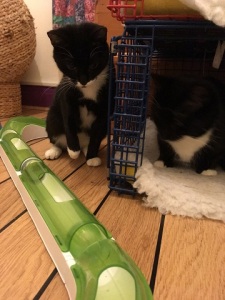 They’ll need to be indoors for a good while until they settle – we normally suggest at least a month. . After that they’ll probably enjoy having a safe garden to explore. We strongly recommend that all cats be kept indoors at night time with access to a litter tray throughout their lives.

They’re very attached to each other so need to go to a new home together.

We always homecheck prior to adoption, and ask a minimum donation of £75 for each kitten. There’s more about our adoption process here: http://www.8livescatrescue.org/adoption-process.html and you’ll find some more photos and stories about them (and our other cats) on our blog: https://8livescatrescue.wordpress.com/ and facebook page: https://www.facebook.com/8Lives/

Information
Status:Needs Home
Gender: 1 Male + 1 Female
Fur colour:Black & White
Breed: Moggy
Age(When Added):10 Month(s) Old
Neutered/Spayed:Due to be neutered
Indoor/OutdoorAccess to Outdoors
Can live with children: Yes
Can live with dogs: Not Sure
Can live with other cats: Not Sure