At least in the short term my worries have decreased considerably since that post.   It all changed when I met the lovely couple who started by helping me to  get into the allotments to feed Mog, and then have gradually befriended Mog so that they now call her and feed her themselves very often when they’re at the allotments.   I just  can’t thank them enough, such lovely people to look out for her like that. 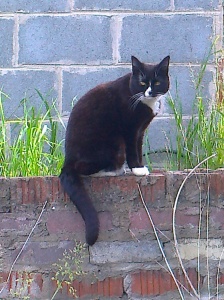 I suspect Mog has slightly more mixed feelings, as her double life is gradually being revealed.  My new friends have only recently taken on the allotment so are just getting to know the other people on the block.  Stories are gradually filtering back to me about Mog’s secret life over there.   Apparently she has quite a fan club.

I met with my friends today and went to feed Mog whilst they sorted out their allotment.   I’m pretty confident of where I’ll find her now, so I wasn’t calling her as I usually do, and I think I took her a little unawares.   She was mid conversation with a lady on the allotment she hangs out on when I arrived.  Nevertheless she politely excused herself and came and had a pouch of Felix with me.

She left a little food in the bowl and I wanted to empty it so I could put some water in for her.  Not being an allotment holder and uncertain of ‘the rules’  I asked the lady Mog had been chatting to if it would be ok to tip the food onto the grass verge.  Yes, that was ok, but better to put remaining food in Mog’s food bowl.  And not to worry about water because she has a water bowl!!!

So I’m invited through to the allotment, where Mog has her food dishes and water bowl, plus a nice little stash of pouches.  In the coolest, shadiest bit of the allotment of course.  She looked a little sheepish as the lovely lady showed me where Mog likes to sit in the large greenhouse/shed.   There’s a cosy bit where she goes in winter, but other places she prefers in the summer.   It became clear that conversations had also been had about whether it was a good option for her to go home and live with the lady. Mog blushed the colour of the tomatoes and slunk behind the runner beans.

We’re going to need to re think things when the weather turns colder, but at least I know she’s absolutely fine for now.  And now I know who’s feeding her I can made sure I stock them up with food.  They also have my phone number so if Mog is ever ill or in difficulty they can contact me.