Posted on August 15, 2013 by accidental fosterer

I’d just decided to go for a nice hot bath yesterday evening, and settle down for a purrs and pyjamas session with my residents, when I had a phone call from the cattery. A ginger tom had turned up there, very hungry and not feeling very well. Of course cats arrive at the cattery all the time – that’s what they’re there for – but most arrive in carriers accompanied by doting (and somewhat guilty) humans who are leaving them whilst they go on holiday. This lad however arrived on his own. He looked very weary and down on his luck, and had a red raw sore ear that he’d scratched to bits. 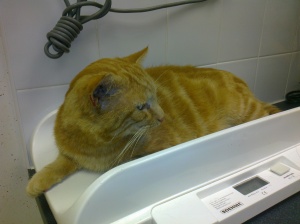 making himself comfy at peak vets

We nipped him up to Peak Vets – thank goodness they’re open while late. He’s not micro chipped, unfortunately, and needed some ear drops to settle things down a bit for him. If he was a healthy stray we’d maybe have just kept an eye on things for a while, or popped a collar on him with a note asking if he belonged to anyone. However given how upset he was about his ear, and that he’s been prescribed drops twice a day for a week, we need to hang on to him.

It’s school holidays and high season for the cattery, so no chance of being able to isolate him there. We’re full here to the point that I was already sleeping on the settee as someone has my bedroom. But …. what can you do? ….. other than ask everyone to shuffle up a bit, be kind to one another, and remember you were all strays once.

It’s been a day of putting the lad on every online lost and found site we can think of, and then (thanks to the cattery for printing and laminating) taking posters around the relevant areas. And talking to everyone I saw about him – just in case they had heard about a missing cat. It’s another of those occasions that restores your faith in humanity – I’d estimate over 90% of the people I talked to were genuinely concerned and put their minds to thinking about whether they’d seen a cat like him or if anyone had lost one – including the guys in Meersbrook Garage.