an unexpected turn of events

Posted on February 7, 2015 by accidental fosterer

To be fair … cat rescue is always a little unpredictable, but this afternoon’s events were well outside of our plans.

We took Sugar off to her new home this morning.  That was pretty much as expected.   Her new daddy had come to meet her last weekend, and she’d obviously taken a shine to him …. so it was no surprise  when she went in quite happily and started playing with all the lovely toys he’d got for her. 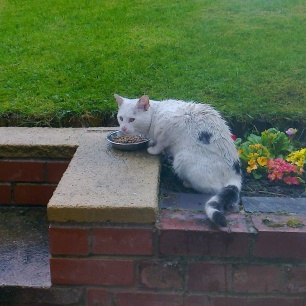 refusing to go in shelter

I came home and started cleaning Sug’s room … there were a couple of cats who were possibly coming in in the next few days so I wanted to have it ready.   Then glanced out the door and there was Jack sitting in the little shelter we have on the patio!  Only the most avid of our readers will recognise the significance of this.  For the other 99.9% of you here’s a little catch up:

Jack is a long term stray who has visited our garden periodically over more years than I want to remember.  He’s never been predictable enough to trap, or confident enough to just come in.  In some ways he’s been a very professional stray cat, maintaining a number of feeding people around the area, never staying long enough to put down roots.  We put a couple of little shelters in the garden a few years ago in the hope that Jack would find some warmth and comfort in there.  The permanent residents use them frequently whilst Jack has resolutely shunned them and stood in the rain to eat.  It’s bothered me that we take in cats from all over the county and sometimes beyond whilst we’ve been unable to help the guy in our garden.  He’s normally filthy, very often soaking wet with the rain and occasionally bearing minor wounds.   My fear has been that if I make a random grab for him – given that he’s not around enough to set a trap – we could just end up scaring him off permanently.   He’s tolerated being stroked whilst eating, but left rather abruptly at any sign of a firmer hold. 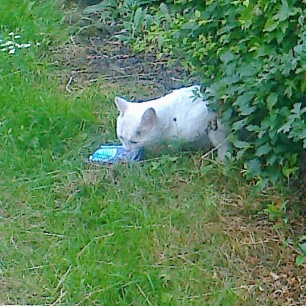 Ok ….. up to speed now.  Delighted to see him in the shelter at last and grabbed some food to take out to him.  Anxious to realise he was limping to his dish and trembling, and pushed to try a little harder to help.  Stroked him whilst he ate, and experimented with picking him up.  It wasn’t a popular move, but it wasn’t disastrous as it had been previously.  Back indoors to ponder what our next move would be …. maybe if he was around tomorrow … maybe one day, maybe never.    Spotted the top opening carrier in the conservatory.  No way would he hang around whilst I took that outside, opened it etc.   Only he did.   Out of the question that I could try picking him up a second time and then get him into the carrier.  Only it wasn’t.   And Sugar’s bedroom was recently vacated and cleaned. 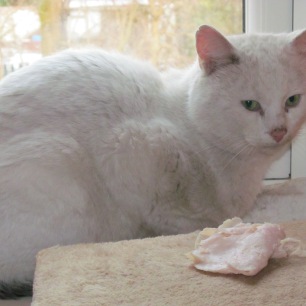 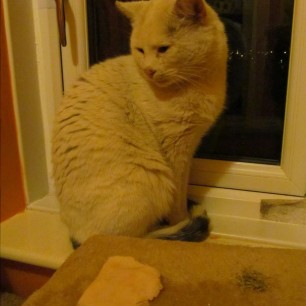 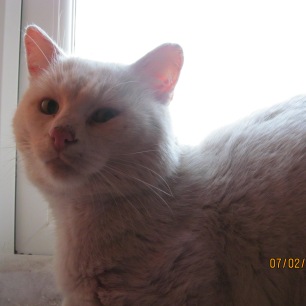 So he’s here.  The cat we’ve worried about for years and felt helpless to care for, went from “out there somewhere” to inside safe, warm and dry within the space of about 15 minutes.   Of course there’s a thousand and one questions about his health and his future and a fair bit of angst about that.  But for now …….

3 thoughts on “an unexpected turn of events”