I’ve just realised that we haven’t mentioned the Zeds here on our blog.  Strange how we’ve managed to forget them when they’re mostly right here in front of us, using the keyboard as a trampoline.   They arrived about 3 weeks ago, aged 5-6 weeks, having been born in a shed.   Mum was already pregnant again and ran off when people tried to catch the family to bring them in to rescue ….. not an ideal situation but the little ones came into rescue on their own.  [Thankfully mum has since been trapped and is now in foster care]

We went to collect them, expecting some fierce hissing and spitting …. and rather a lot of fleas.  Oddly enough there was none of it.   They were a bit nervous but otherwise fine.  Their shy-ness lasted about 24 hours, at which point they emerged from their igloo ready to take on the world – despite the residents being rather less than welcoming.

I have to confess a secret preference for tom kittens, they’re somehow more easy going and affectionate than little girls.  These two are no exception … absolutely adorable little boys.    The residents have grudgingly accepted that they’re here for a while.

In some ways they’re quite different characters – Zacchaeus is the calmer more sensible one (RELATIVELY …. we ARE talking kittens here) and more likely to do as he’s told,   whereas Zebedee is just a complete crazy live wire.    The times they just settle down to sleep are probably the best. 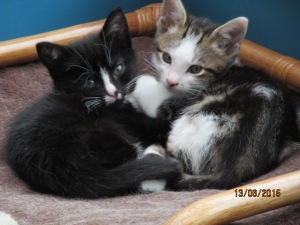