two down … two up

Posted on August 27, 2016 by accidental fosterer

It’s easy to get caught up in the drama of Tabs and Mowse moving to their new home… and we might slip into it again in a minute ….. but lets just enjoy a slightly calmer rehoming story for a minute.  A few days before the mummies went off to their new home, we took Tomas and Tobias (2 of Tab’s kittens) to theirs.   Despite their “farm cat” origins these guys have grown up very confident and happy with humans, and their arrival in  new home was pretty much ‘normal’. 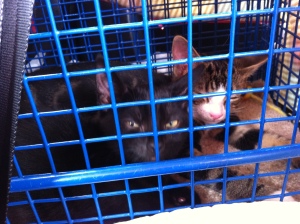 on the way to new home

Ok …. I say “normal” ….. though I’m not entirely sure how you define “normal” with a couple of growing kittens. Digging up cobwebs in an apparently very clean and tidy house is pretty much average I think. Slightly out of the ordinary was Tomas finding the one gap under the kitchen units that hadn’t been carefully blocked, worming his way in there, and being unable to find his way out. Just how ‘abnormal’ is it to find yourself lying on the kitchen floor on your first visit to a house, next to someone you’ve only met once before? I guess plumbers and the like find themselves in this position all the time and think nothing of it. 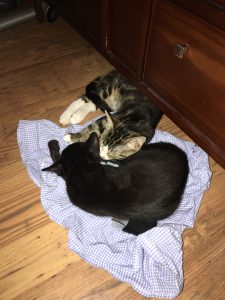 Once out, they settled themselves on the little blanket they’d brought from home … and went to sleep. This isn’t entirely ‘normal’ …. I’ve had lots of kittens run and hide, a few start to get into playing but not a pair who just go to sleep in the middle of the kitchen floor. Then again .. they’re two little tom cats so maybe they’re starting as they mean to go on 😉

Finally ….. the numbers were starting to do down … especially once the mummies went a few days later. Starting to think of happy days where I had a bit of space, my bedroom back even – especially since some of the others were also reserved to go to to new homes after holidays

Then we got a message from a young woman who lived in an area that wasn’t very safe for cats. She’d taken in a cat a few weeks ago because lads were kicking her around on the street. She’d been pregnant but most of the kittens had died and she’d been unable to feed the remaining ones. Although a refuge from the cruel lads, her home wasn’t safe because of a dog who went after cats and a toddler who opened doors. Best laid plans of not taking in any more cats fell apart … and Kranji arrived.; 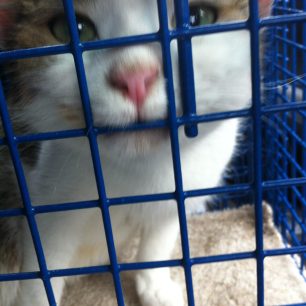 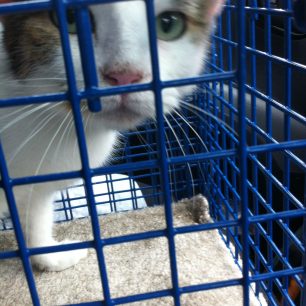 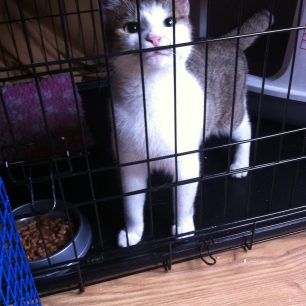 It was ok though because a couple of Xin’s kittens were off to their new home shortly after. Kranji shared my bedroom with Jasper and all was well. Kind of …. I hate to be sexist about this …… but the majority of our cats at the moment are male …. and the majority of our cats at the moment are purry and placid and get along with the others. You can see where I’m going with this. …. these two groups map almost perfectly onto each other. Kranji is very loving with humans but poor Jasper has retreated into his basket having been smacked around the head a few times. Xin is adorable can frequently be heard behind her bedroom door yelling at the kids and clipping them round their ears. Minnie Mowse has taken it upon herself to be the sole guardian of the T&M teams (and Simon) space and growls menacingly if any of the little Xs want to come and join their games. Just as Jasper makes little marks in the wardrobe door to count off the days until his family return from holiday and he can escape, so I count off the days until Minnie’s family come to claim her 😉

Two down …. so it should be easier. As fate would have it though …. we went straight from there to pick up two of Kranji’s kittens. They’d been hand reared from age 2 weeks, their siblings had died and Kranji just couldn’t cope and someone had taken them on and cared for them. However they were now 7 weeks, weaned and needing someone to find them a safe furever home. Two up

They’re very sweet little boys … but Kranji had grieved and moved on ….. and didn’t want to know. The residents mostly were fine about them being downstairs but Mr Puddy put up a seriously protest … so they went back upstairs. Minnie objects .. but mostly we’re managing. They’re rather conspicuous among the monochrome theme though