at sixes and sevens

Posted on April 14, 2017 by accidental fosterer

Our 6 cats became 7 as Jenson returned from his foster home last weekend. It should be easy to manage really … we’ve had over 20 cats here at peak times in the past, though with builders around it’s a bit more challenging.

All you need to remember is that 2 of them must not be allowed outside at all, another can be allowed out but isn’t able to use the cat flap to get back in and tends to wander off. Another is able to use the cat flap, but only one of the available flaps, she’s scared by the noise of the other – hence us having two. However that flap is the one that another cat can open when its supposed to be locked on “in only” …. so it has to be completely locked, but only after scaredy cat has come in. 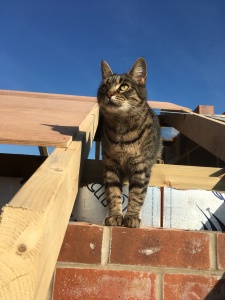 None of the cats should be allowed out whilst we have builders here … not without checking that it’s going to be safe for both parties. The builders have been very careful with cats and doors but you do need to have an eye to the fact that they unplug the plug in flap to thread their power leads through. That’s the flap that doesn’t have a two day microchip scan, so tends to be locked on to “in only” permanently so no one gets out who shouldn’t be out. A slightly wedged open cat flap with power leads running through it is an open door to feline adventure. Which means that mostly all the cats need to be kept out of the kitchen whilst the builders are there so they don’t slip out of the flap .. and the ones who aren’t allowed out at all need to be kept out of the lounge too so they don’t rush through into the kitchen when I open the door. Oh …. and did I say that if the flap gets unplugged it reverts to being open to anyone and everyone both in and out! So you need to check that before allowing anyone with restricted access into the kitchen at the end of the day.

Got that? Good. That’s the easy bit.

Now to sort out the food. Whichever room / group of rooms a cat ends up spending the day in, they need to have access to food, water and litter tray. One of them seems to need lots of food regularly available as we believe he’s on the edge of thyroid issues. Another needs to have just special gastro food for his food allergy. So he needs to not eat anyone else’s food or have his food eaten by them. At the same time he doesn’t want to be shut in on his own. Ideally he needs to have an exclusive litter tray so we can see the ‘results’ of various different diets. Another has a short term tummy upset.  A couple of the others ask for food then when we put it down walk away, asking to see the menu to re order.   Another is a big lazy lump who waits until he’s really hungry before wandering into the kitchen.  We have covers to put over all the food bowls to limit access to forbidden foods .. but then one of them likes to pick food out of the bowls and bat the biscuits around the floor, losing them in obscure places all over the house … of course to be found by the one who shouldn’t be eating them.  They all want to eat when they want to eat .. and to take their time over a meal.   They want the food so I remove the cover ….. they change their mind …. I cover it up …. they change their mind again …  repeat …… +++ ….. x7 cats.

So long as that’s all sorted there are just a few other things to take into account:

One of them is semi feral and cannot be picked up, herded or otherwise induced to move from one room to another.
Another isn’t feral .  …. but is very skittish if being chased …. so ditto the above.
The two younger ones are a pain to the older ones and must not be shut in a room with them.
The two younger ones also fight with each other
One of them has a tendency to spray and pee more or less anywhere if there isn’t a clean litter tray within paws reach.
I have a day job
I need to retain some sanity.