Posted on July 7, 2017 by accidental fosterer

Is it my age or does time just race by these days?  It doesn’t seem 5 minutes since we were putting the Spring Newsletter together.   The building work is thankfully finished …. though the decorating is still ongoing ….. and we’re pretty much back to what passes for “normal” around here.

“Normal” at this time of year means a house full of kittens, and that’s pretty much what we have.  It’s all a little complicated …. however,  reflecting on the things I want to tell you about I realise there’s a bit of a theme of blended families …. mixing and matching and unlikely pairings over the last 3 months.

First there was young Jenson who came to us early this year.  Absolutely gorgeous young man and otherwise healthy, but with  food allergies that were difficult to resolve.   Being black and white and prone to tummy upsets, rehoming him was a challenge. … but then his purrfect home came along.  A fabulous loving family who were first time cat slaves, but experienced with bunnies and took Jen’s digestive issues into their stride.   Jenson in turn appears to have taken the rabbits in his stride and realised that at the end of the day they have more in common than otherwise.   He’s also settled on a food that suits him and his tummy has been fine. 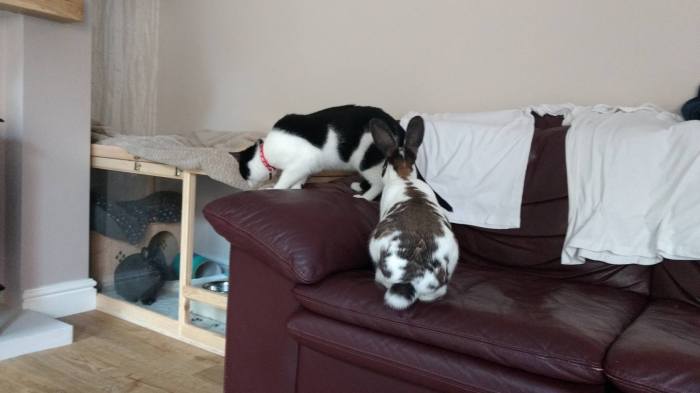 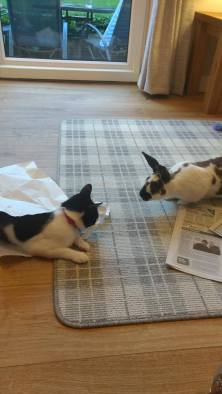 getting to know you

Our next arrival was little Basil, a part persian kitten who’s family had found themselves to be allergic to.  He certainly knows how to make an entrance! 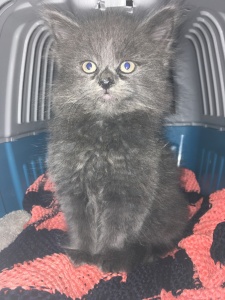 And then poor old Jasper came back into rescue through no fault of his own. Since Daisy Mae had dropped lucky with grandma (see Spring Newsletter) there was a foster space he could slip into. 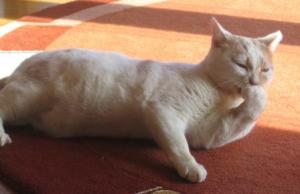 Lets put those two on hold for a minute because the next arrivals were Caramel and her three kittens after they’d been kicked out of the house onto some waste land to fend for themselves.   They’re a lovely little family and happy to be safe in rescue. 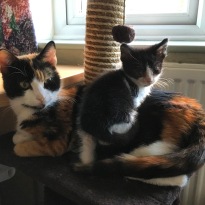 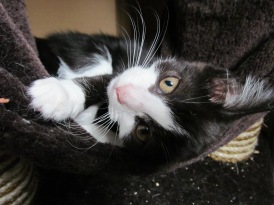 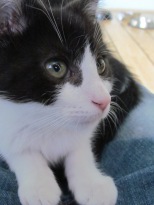 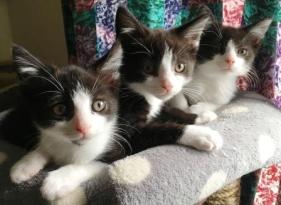 As there are only 3 kittens and we like to home in pairs, we were happy to respond to a request to take in a single kitten just a wee bit older than them. 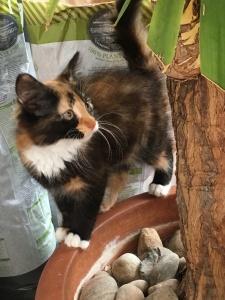 We called her Karis because I went to collect her on the evening of our fundraiser to celebrate our charity status, missing half the event in the process.  Since she had ear mites we kept her separate from the other kits initially.

We’ll pop them back on hold too now, and return to Basil and Jasper.  If this feels complicated and confusing ….. well that’s what rescue for you – constantly back and forth between different cats.   Actually, lets not go straight back to Basil & Jasper,  lets scroll right back to almost a  year ago and the seriously blended family of Tabbytha & Mowse … you’ll see why in a minute.  You many remember that they were farm cats who came to us, both very pregnant,  gave birth together in the same bed within a week of each other, brought up their kittens as a single family, and then adopted young Simon (a kitten found alone in a garden) too. 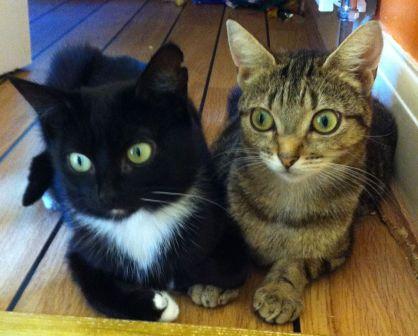 with their own kits 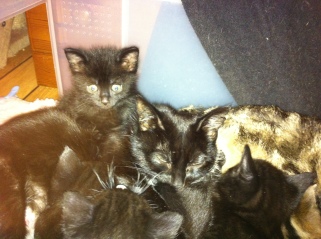 If you’ve followed our stories you may recall that they found the most fantastic home in North Yorkshire at a small stable with a couple of horses and a few sheep.  It’s been perfect for them and they’re really thriving.  Sadly their mum’s domestic cat went to rainbow bridge just around the time that Basil & Jasper arrived in rescue, and she asked about adopting them both.  Not the most obvious match with Bas being a kitten and Jas being a mature/senior cat but their adoptive mum knew the different charms of both age groups and was keen to give them both a chance.   As with Jenson and his bunnies, introductions were careful and gradual and its going very well.   I understand it’s  been a little edgy when it comes to discussions about football, but we’re hopeful that that can be worked through 😉 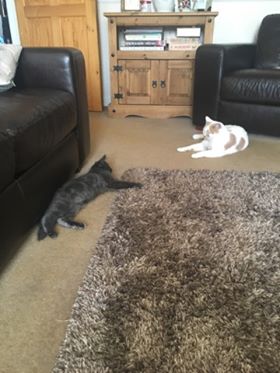 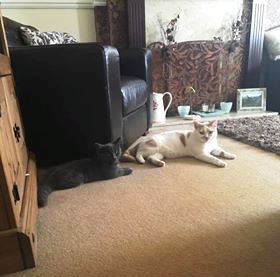 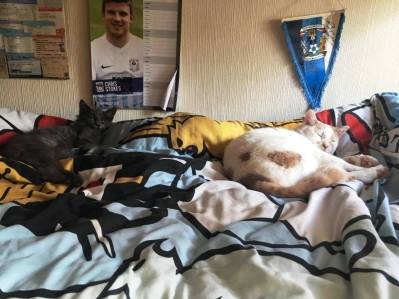 Taking them up to North Yorkshire to their new home also meant that I got an unexpected and very welcome opportunity to revisit Tab & Mowse.  “Welcome” from my point of view that is …. I doubt the girls were impressed.  If they were, they hid it well. 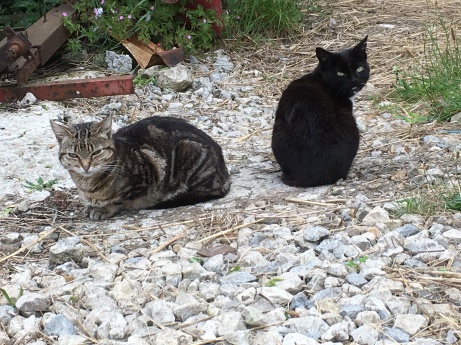 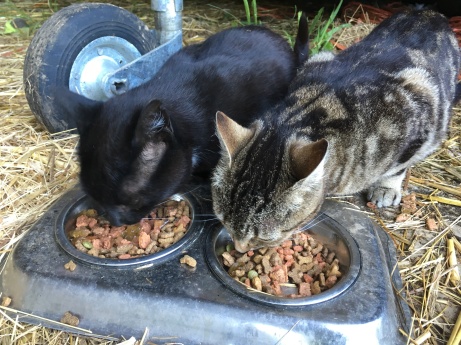 Heartbreakingly lovely to see how they’ve settled.  They very clearly are at home there and are living life  to the full.  They’ll spend time in the stable with the horses, and chat to the sheep.   As rodent control executives they take their employment seriously.  They work hard and make sure that humans are escorted to their food bowls to pay their wages.  The pair of them are very obviously deeply attached to each other still.   I’m sure they’re also attached to their humans.   They’ll never be lap cats but the affection is plain to see.

Coming back to the kittens here.  Are you keeping up?  We have Caramel and her 3 kittens and then Karis to introduce to them once her ear mites are sorted. However before we have chance to make those introductions another 4 kittens arrive.   These are from two mums who are sisters.  The three kits from one litter were fine, the other little family had been less fortunate with most of the litter dying, just leaving one kit who wasn’t well. 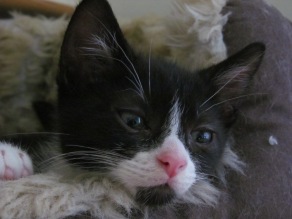 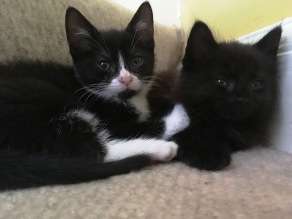 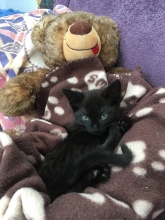 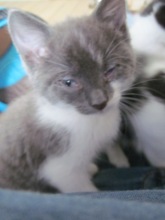 We got back from Wakefield where we collected them from just in time to take Caramel and her kittens to their vet appointment to start vaccinations.  A quick call to our long suffering vet, and poorly little one was added into the appointment.   The vet  felt it was something neurological and talked about chances of survival in kits like this being linked to how much spark they showed.  The vet nurse and I immediately named her Sparkle and she began living up to the name.

As Sparkle needed some extra care she ended up separated from her cousins and living downstairs with the residents, Karis …. and any remaining ear mites.   The three healthy kittens were introduced to Caramel and family …  and seem to have integrated very happily …. Caramel isn’t much more than a kitten herself but has cared for her triplets well … and then just taken on board that there are twice as many of the little horrors. 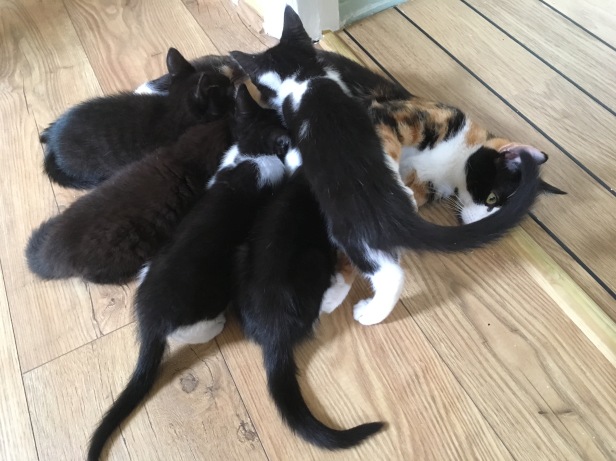 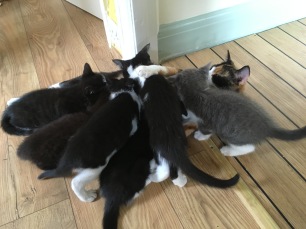 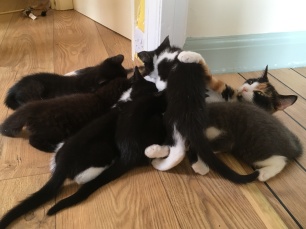 They’re all perfectly capable of eating solid food …. but will try it on with her.   We’re not absolutely certain but strongly suspect that Caramel has become pregnant again prior to coming into rescue.

Karis has been very maternal with Spark, washing her, cuddling her, playing gently.   What has been even more amazing is the kindness of several of the residents towards her.  I don’t know whether its her condition or her age that make Spark cry if she suddenly realises there’s no one there, but  Jango, Honey and Rufus have helped by spending lots of time sitting with her to give Karis a break.  I’m especially impressed by Jango who is normally quite frightened of little ankle biters.   Linking this back to the start of the newsletter …. you can see the painty dustsheets on the sofa as we’re still decorating. 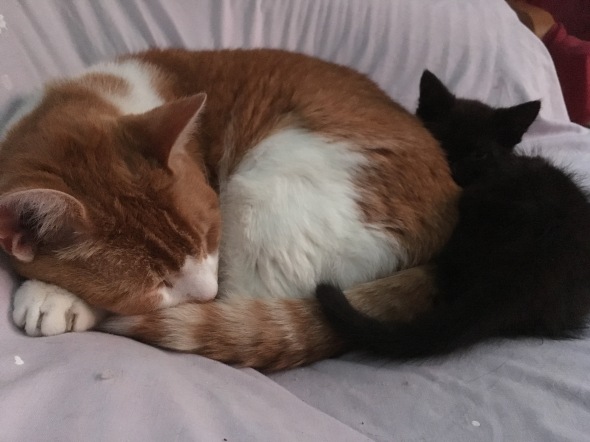 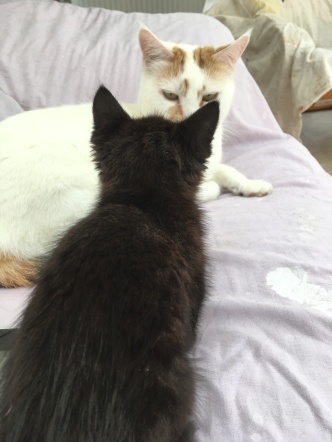 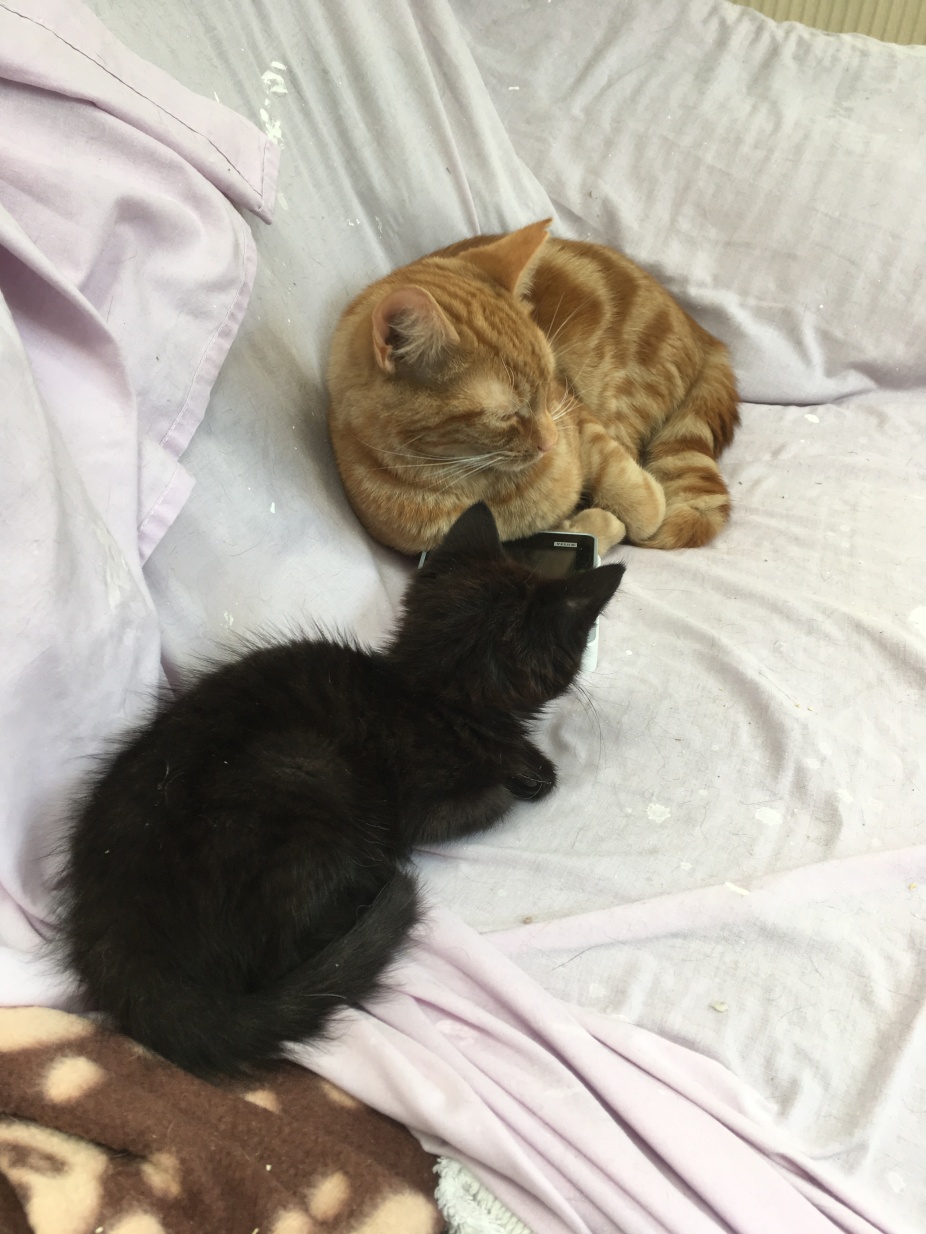 Caramel’s kittens and Sparkle’s cousins are ready for adoption now.   Caramel will be fully advertised after she’s been spayed .. which will either be after we’re sure she’s not pregnant or after her second litter of kits are grown.   Hopefully Karis & Sparkle will be able to be advertised to be homed together when we’re a little more clear about Sparkle’s health issues.  You can find our adoption adverts here