Posted on May 2, 2018 by accidental fosterer

So we’ve ended up with three tom cats, all at different stages in the rescue process but all gradually moving towards their happy furever afters.

Stanlie is the furthest away in some respects. He’s not even officially an 8 Lives cat. We’re pretty certain he’s a long term stray. He arrives every day for food and has gradually progressed from only agreeing to eat if we’re the length of the drive away, to being happy to eat whilst I sit next to him, to taking treats from my hands and allowing me to stroke him a little whilst eating.

We’ve not been able to find any record of anyone missing him, and the limited view we’ve had on him suggests he’s not neutered. So is unlikely to be chipped. When he’s a little more confident we’ll scan him for a chip but don’t want to scare him away for something that is unlikely to be there.

Paul is kind of running neck and neck with him …. though on a different race track. He definitely doesn’t belong to anyone and is officially an 8 Lives cat with his own bedroom here. However for a couple of weeks he was much less confident around people than Stanlie. Perhaps ironically that’s partly because he is indoors … and maybe feels a bit trapped. 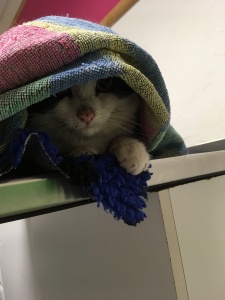 He managed to be brave at the vets though, and came home from being neutered feeling more hopeful and positive.   That was a bit of a turning point, when he agreed to accept chicken treats from hands.

And then moved on to agreeing to be stroked .. a little …. on his own terms

He went back to see Dr Fran this week to start his vaccinations and was so much braver than last time. He didn’t need to hide under his towel whilst being examined. Not only braver . … but bigger! He’s put on half a kg since arriving in rescue. Days of lounging around, sleeping peacefully without fear of danger, and being fed regularly.

Ozzy is a different story all together: stuff of confidence and bursting with the desire to meet and greet people. Since his “little op” he’s singing fewer bawdy songs and starting to think about settling down and being part of a family. Since his ear drops, he’s got rid of his ear infection but gained some rather dodgy greasy looking sideburns. Sorry Oz … they’ll clean up/grow out very soon.

He’s had a few times of mixing with the residents and “doing outsides” and has been fine … but rather too boisterous for the laid back resident crew. Even the dog in the next garden reported feeling a bit overwhelmed by the sight of an excited Oz on the shed roof. 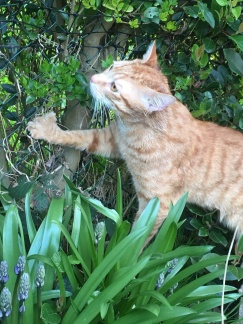 Oz just needs the right forever home and he’ll be sorted. His adoption advert is here