Any colour you like … so long as it’s black

Posted on August 1, 2018 by accidental fosterer

We sit in solidarity with Henry Ford right now as we offer cats and kittens in … well … black. We have various sizes .. small timid and cute: adorable medium:  and possibly depressed adult.

Isaac is an adorable live wire, about 4 months old, full of life and hope. He’s not twigged yet that he’s black and will probably wait longer than kits of other colours to find a home. He’s very purry and gorgeous. 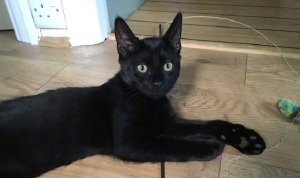 The five others are the H Team – mummy Hecate and her four kittens. 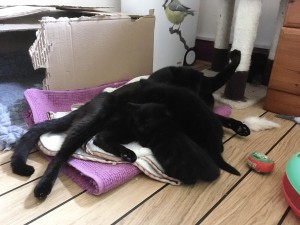 They’re an interesting family.  Poor Hecate is only a youngster but so far as we know this is at least her third litter.  She’s had a rubbish life so far.  As if it wasn’t enough to be neglected and pregnant, she’s seen her previous litters not survive.   Who knows what she made of it when she arrived here with her week old kits some weeks ago.

She was safe and cared for, and had space to bring up her little family this time and see them survive.  She was a little hissy when we were handling her babies while they were tiny … though not nasty and not as they’ve got older and come out the nest.

Most adult cats we’ve had here are either friendly or wary or scratchy.  Hecate is none of these.  She greets me and asks for food, allows me to stroke and groom her, but never purrs and doesn’t seek out affection.  Sometimes she accepts the treats I give her … often to only then drop them and leave them for her kits.  She cares for her kittens, though I think also passes her negative view of people onto them.   For the large part its a silent family.  I know they can all purr because there is a group purr when mummy feeds the kits …. but mostly there’s nothing. 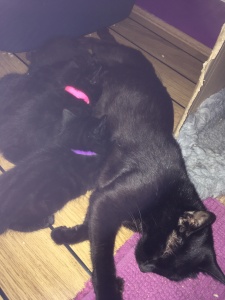 I honestly wonder if Hecate is depressed.  I would be if I’d had her life.  She’s seeing the vet next week so will talk to her about it.  Meanwhile I’m struggling to work out what’s best for her … and her kits.  Is it better for her to keep the kits with her?  or have some space?   And from the flip side … is it better for kittens to have mum around, even though she’s passing negative stuff about people on to them?  Or maybe its hereditary.  Is it nature or nurture that the kits are wary?  They’ve all been safe here since about a week old, but two are noticeably more confident than the other two.

The weekend before last, after Mathilde and Mollie went to their new home, we decided to bring a couple of the kittens downstairs to live as part of the family as M&M had done.   They’d have more contact time with people and with cats who think humans are on the whole a good thing.  It was too much to ask of the resident cats that we brought all 4 kittens down, and felt wrong for Hecate to suddenly lose all her babies, especially given that she’d lost her previous litters.  So splitting into two pairs seemed to make sense, but then the dilemma of who to choose.  It’s the usual ethical dilemma with limited resources do you offer to the most needy, or the ones most likely to benefit? … and what happens to the others?  Having spun the dilemma around my head for a long time and come to no conclusion .. I decided that it would perhaps just be a bit of a lottery.  I took a cat carrier up to their bedroom, opened it, and waited for two to climb in …