It seems only a few days ago that I was watching Jette’s kittens taking their first breath … but today they’re chasing around their bedroom, and I know from experience that in a few more days they’ll be climbing and causing absolute mayhem.  What I DON’T seem to learn from experience is just how quickly this happens.

They were 4 weeks old last Sunday and desperate to be allowed out of the nest. Jette and I reluctantly decided to drop the drawbridge on the “very useful box” and allow them out. 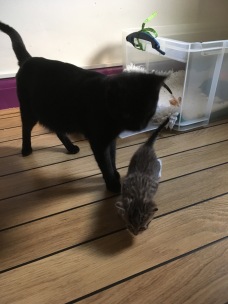 Jette found it hard at first … needing eyes in the back of her head to keep track of all of them:

It wasn’t easy … but once they were out there was no going back. 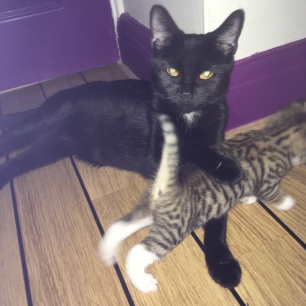 So we enter the period of very steep learning curve for kittens. Moving from fighting over nipples to perfecting table manners …

Just what DO you do with your feet whilst eating?

And then there’s a minefield of litter tray etiquette to learn. Hint! Pooing right behind the door so that when its opened your sh1t is smeared across the floor is not generally regarded as good manners! Neither is peeing right at the door opening and just where I step sock or bare footed into the room. Other handy tips: don’t go to sleep in the litter tray, don’t wee on your siblings, don’t kick litter in other people’s faces.

The intermediate course covers the ability to wee & poo quietly without having to announce to mummy and everyone else in the house what you’re doing, and expects that if you go into the ‘grown up’ litter tray you’ll be able to get yourself out again. Also: NO FIGHTING in the tray! For some reason it brought to mind an image from childhood swimming baths days:

Some of the little Riggle (Squiggle/Raven) kittens have been to visit aunty Jette and haven’t been made entirely welcome. However one little J toddled off to see aunties Squiggle & Raven this week and was given a much better reception …. 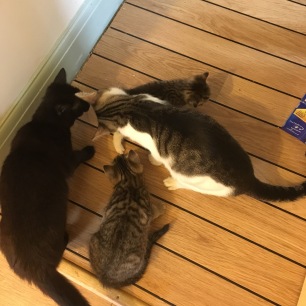 …. if you regard having your bottom washed as a positive sign of hospitality! We’re not judging … It’s one thing to have a tiny kitten intruder when your kits are twice her size … its quite something else to have ninja kits bouncing into the nursery when you’re feeding tiny kittens.

They’re 5 weeks old today. Ninja kittens in training, and starting to emerge as individuals. We don’t usually use collars but we have two black kits (Jellybean & Jethro) and two tabbies (Jaffa & Jade) who look very similar … so decided to go for colour coding. Little Jemima as the only black and white kit doesn’t need a collar, but we don’t want her to feel left out.