Posted on April 4, 2020 by accidental fosterer

The last couple of weeks have been an interesting learning curve in many ways, both for me and the nine cats we’re in lockdown with.   I’ve learned more about IT and working remotely, and in a sense that has been the easiest part of the learning.  The tricky bits have been:

a) For me: “they don’t miss you half so much as you’ve imagined over the past years!”  That’s a hard one.  I’ve always felt bad about leaving them to go to work in a morning, kissed each of them on the head and promised to be back soon.  I now find that during most the day they don’t give a f@ck … they go off outside (the younger ones) or settle on the bed (older ones) and pretty much leave me to get on with it until tea time.

b) For them:  On the occasions where they decide to come to find me with some demand or other – I can’t always be immediately available.  THIS IS HARD.  Usually when they ask me to jump … I immediately ask “how high?”.  The notion of waiting is as new to them as Zoom and Microsoft Teams are to me.  Also there is the issue of rights to space on their bed. To date the understanding has been that I’m allowed to share it overnight but … a little like a B&B … need to vacate it during the day so they can stretch and relax and do what they need to do. Comments have been made, even the threat of a formal complaint, if I’ve decided to flop on the bed for a few minutes at lunch time. 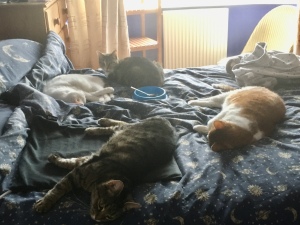 No space for you!

I love that our cats are innocent of the current COVID-19 crisis.  They know something is different though.  I see them looking at me in a morning, looking at each other, looking at the clock, then the car, and rolling their eyes.  I ‘hear’ them muttering: “aren’t you going to get in the big silver mouse and drive away for a while? … give us some time to get on with  stuff?”

Little Rowan helped created a nice ‘atmosphere’ for my first call of the morning. 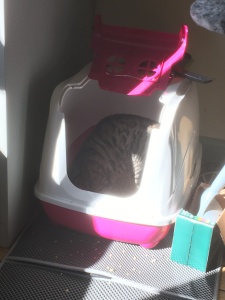 Flipper came in later to preside over Rowan’s home schooling.  She felt that as another tabby she should take charge of him. 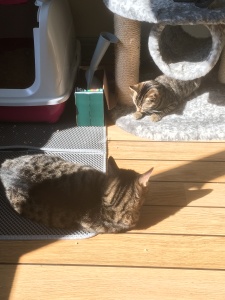 Sadly it didn’t go well. Flipper felt that little Rowan was wearing his stripes and dots all wrong …. apparently . There was only one way to do it … and of course it was hers. Although Flipper had sat in with me on the Microsoft Teams training, she’d unfortunately skipped the Equality and Diversity training …. and we had to run through some of the key points later in a 1:1.

I’ve had more attention during the sunny days whilst it was comfortable to snooze in the office, but on non sunny days I’ve been more or less left to get on with it. With the exception of Jango of course.

Many of you know Jango well. He’s one of our long standing residents. Now quite elderly, deaf, very arthritic and a little confused. In recent months he’s learned that if he howls loudly (or maybe as he’s deaf he just thinks its normal volume) I’ll run to his aid. I’m more than happy to do this. His requests are usually for me to be a human stairlift as going up and down is manageable but painful for him. Or for food … which again can easily be provided. During isolation though he’s got into the habit of coming into my office in the afternoon for some love and attention. 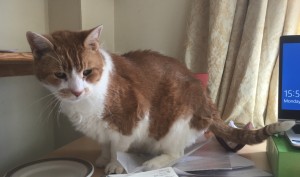 His first foray into the office was to go under the desk and start chewing the cable to my work lap top! Tricky on many counts! My work depends on it and its NHS property. Add to that the fact that I was on a call to a patient at the time, dealing with my phone phobia, and an ill fitting pair of head phones (or mis-shapen ears – depending on your perspective). We’ve now blocked access to the area using cushions and the kittens’ play cube.

His second, and now regular approach, is to ask to be picked up. That’s kind of ok. I can more or less do that without losing concentration or earphones coming loose. However he then sits purring loudly on my lap. On one level I love that!  There’s a lot of comfort in a Jag hug during difficult times.   On another I had to check with my supervisor yesterday whether the purrs could be heard through the microcphone. Whilst many of Jag’s issues are about older age, he’s always had a wire chewing issue, leading to us having had to cover every wire in the house with cable tidy or other protection. You’ll have guessed what happened next … as I gently tried to push him away from the microphone, he swung round and clamped his teeth on the cable.

We have securely fitting, ‘over the ear’ wifi/without cables headphones on order from a well known online supplier.  Let’s hope that brings us an easier week next week. 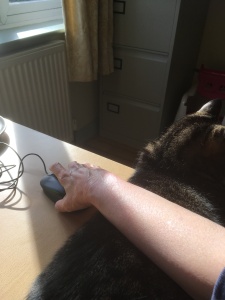 I don’t want to be unkind … but …  it’s not entirely helpful if I’m honest.

Aunty Honey has sensibly got on with what she’s best at … looking after everyone.  If you need your head washing and a bit of reassurance …. Aunty Hon is the place to go. 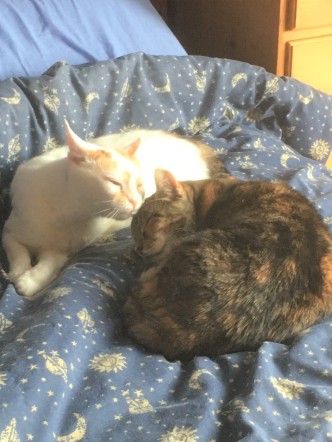 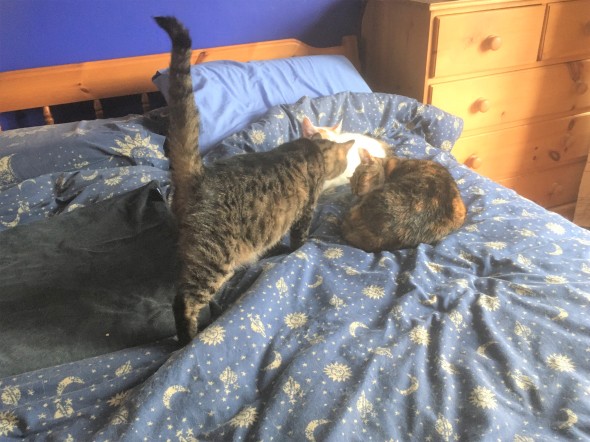 I go to Aunty Honey quite often x