I returned from taking Jango on his final journey, to see if Henderson had managed to produce a urine sample for me.  He hadn’t but must have realised how stressed and upset I was because when I said “please Hendo just do me a wee” he popped straight in the litter tray and obliged.   Thus, after several weeks of not driving at all, I made two trips to the vet in the space of a couple of hours. 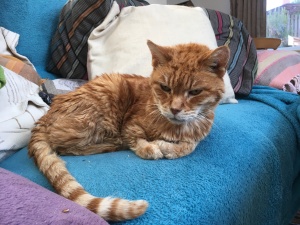 Sat outside the vets for an hour in the car whilst they tested the sample to see if there was protein in it so that I could then take relevant medication home with me.  What they found in his urine though wasn’t protein, but sugar! … lots of it!  Henderson had added another diagnosis to his list – now he had hyperthyroid, chronic kidney disease, high blood pressure AND diabetes!  And It was serious enough to need admission.  Lockdown hours meant that the vets were closing soon and we agreed it was best to wait and admit him first thing the following morning.

Thus on Tuesday morning we repeated the nightmare journey to the vets that we’d had with Jango on Monday morning.  Another very tearful car park handover with another lovely lovely vet nurse.  Henderson, unlike Jango, was alive but I feared I’d never see him again.  Conversations with vets had been kind and practical, planning what to do next …. but I’d noted the comments: “he is a very old cat”  “this isn’t a good diagnosis to have”.   Normally I’d have spent time visiting him whilst he was an in patient, and certainly would have been there if it came to him being put to sleep … but it seemed none of this could be possible.   I tentatively asked what would happen if it came to the worst but couldn’t quite bear to hear the answer … so may have misunderstood ….  it might be possible to do it on the car park.  This is in no way a criticism of the vet practice who I believe are doing their absolute best to make a terribly difficult situation as human and bearable as possible.  It’s more an acknowledgement of how agonising it’s been for all of us in these circumstances …. both with poorly animals and poorly humans.

I came home and wept … and waited.  We now had two fewer cats in the house than we’d had a couple of days previously.   The four “teenagers” continued to play out in the garden oblivious (I hope) to all the stress.  Amber our semi feral does her own thing, and I’m guessing dealt with it in her own way.  However Honey and to a slightly lesser extent Flipper were seriously distressed.  Flipper, a vocal cat at any time,  went around the house calling for her lost friends.   Honey paced the house and the garden for several hours – round and round the same circuits.   I’ve not quite seen anything like it before.  It wasn’t randomly roaming around, she was on a route march, feet stomping on the floor …. in through the cat flap, through the kitchen, round the lounge, back through the kitchen, into the conservatory, round the conservatory, back into the kitchen, out the cat flap, into the garden, along the wall, back the other way on the wall, up the garden, back down the garden, in through the cat flap … and repeat, and again … exactly the same circuit … and again …. and again …. and again.   To my horror I found myself feeling quite annoyed with her … I was exhausted, stressed and heartbroken and to watch her in her own way expressing similar (I think) sort of feelings but be completely unable to comfort her was almost more than I could bear.

Wednesday was Flipper’s birthday … our kitten was 8!  We’ve always made a big deal of her birthday because she’s the only one of the residents who’s exact birthday we know.   She was born here on 6 May 2012 early in the morning.   With the “teenagers” here we at least know the year they were born and the younger ones we can pinpoint within about 2 weeks.  The other older cats though we don’t even know which years they were born.   Jango had been guessed to be 5 years old by the vet when he arrived here 10 years ago – but he could have been anything between about 3 and 9.  Henderson was guessed at 14 three years ago but again there’s a decent margin of error in these things.   This is why we try to make some sort of treat every day …. because you never know when it might be someone’s birthday x

Anyway … Flipper … we’d managed to get some boiled ham … one of her (and Henderson’s) favourites, a few new toys and some cat nip seeds to plant.  I’d looked forward to it … well what else is there during lockdown?   On the day it just wasn’t right though.  How on earth could we celebrate with Jango on his way to the crem and Henderson hooked up to a drip at the vets.  So we put it on hold. 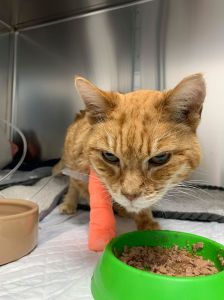 Thursday arrived.  “We need to see what happens in the next 48 hours” were words I dwelled on after Hendo was admitted.  Here we were 48 hours later, each day bracing myself for a death sentence.  And the verdict? … “He can come home later this afternoon”.   Whilst it had been desperately painful to be away from Henderson,  once the prospect of his return was on the horizon my feelings did a double shuffle …. there was delight obviously, but also panic and a realisation of the extent to which him being in someone else’s care had been a relief.   Now it was going to be down to me again to watch him and make day to day, hour to hour decisions.  And of course it had to be a bank holiday the following day.  Can someone explain why when I’m exhausted with work and desperate for a break there isn’t a bank holiday in sight … but the minute we have a poorly cat they are always plentiful and imminent 😦

Anyway, we arrived home with a slightly better looking Henderson, insulin, syringes, sharps box … and a jar of honey (thanks Aunty Jenny) in case of hypos.  We had a glucometer on order … which arrived Saturday … and were plunged into a world where sticking needles into cats several times a day had to become the new normal.

All the cats seemed pleased to see him home, and we celebrated Flipper’s birthday just one day late.

We had to be careful with the “teenagers” who were a little over enthusiastic with the head bumps and nearly knocked him off his feet.  At one point I think he only stayed upright through Dasher’s head bump because Kevin was doing the same on the other side …. equal and opposite forces and all that.  Everyone was pleased to have him home … he’s a very popular cat.

In typical Henderson fashion, he’s been pretty much impervious to the insulin, as he is to the other meds he’s taking.  Despite being tiny and frail he seems to need a dose large enough to floor a rhinoceros to have any impact on him.  We’ve spend the last 6 weeks returning to the vet every couple of weeks for more blood tests and having his insulin dose increased based on the results.

It’s all been pretty daunting and scary, especially while the grief of losing Jango is still so terribly raw.  However he’s still here, he’s enjoying life and is a good patient in terms of tolerating the needles.   I’ve reached the point where I don’t feel stressed at all about doing his injections … it’s something I can do whilst the kettle is boiling in a morning and whilst tea is cooking at night.  I still get anxious about doing the blood tests … it’s not nice trying to make him bleed, even though thankfully it’s a only a very tiny drop of blood that’s needed. 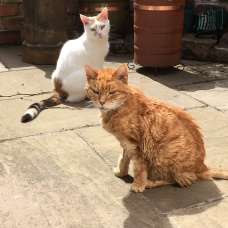 It’s been hard working from home since we lost Jango … our main office manager and sun tracker.  However it’s been a relief to still be home and be able to check on Henderson multiple times during the day.  There has been a big shake up in the office of course.   We’ve had to advertise for some of the key posts.  There have been applications, appointments, redeployments … some promotions and disappointments.   Catch up on all the office gossip in our next post 😉