Posted on September 12, 2013 by accidental fosterer

As Meg’s kits reach the grand old age of 4 weeks I’ve been musing on the various stages of kitten development. Not simply the “eyes open at 7-10 days” sort of stuff, but at what age they appear in my mind to become individuals. That largely came about as I was tidying up my kitten photos and naming them. When they’re very first born they’re simply “Meg’s kits” and so long as they’re breathing and feeding ok it seems fine to leave it at that. 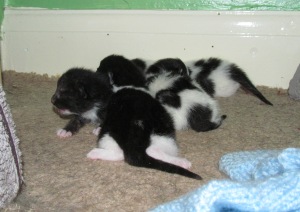 We have a monochrome abundance with this little family so initially it took some effort to separate them out. Once the first excitement was over, there was a gradual process of making sure I could identify each of them from the others. So one of them has a little white moustache, another a black dot on his shoulder etc. Four weeks on this seems laughable – they’re obviously different and recognisable. The desire to name them came around two weeks old I think, when they were moving around a little more and looked a little less like disabled hamsters. During week three they began to really separate out in my mind as individuals: although Mouse was the first one ever to come out of the nest, its now almost invariably Mittens who is first out when I come through the door, followed closely by Mouse. Magic toddles along a little later, whilst Minstrel is often still fast asleep for a while after. Some days I have to wake him from his dreams when he’s meowing in his sleep. There’s another point to ponder – just what exactly does a 4 week old kit dream about?

Today appears to have been a significant day. There’s a small puddle on the floor when I went in at tea time, and a serious faced Meg – they’ve clearly been given the litter box lecture. Kittens sniffing with extra interest around the baby litter tray. Mittens gets in, and slides around hopelessly in shallow litter. He has an almost worried look on his face. I gently lift him into Meg’s grown up sized litter tray where there’s a deeper covering of litter and he doesn’t slide about so much. Mitts sits down with a firm look of concentration on his face and stays there, quite still for several minutes. It’s as though he’s trying to remember the instructions his mum gave him. Then he stands up and kicks litter around for a while, not entirely sure about why he’s doing it, but that’s what he’s been told to do.