Posted on February 14, 2014 by accidental fosterer

We had a couple of days off at the beginning of this week so responded to a request from another rescue to help with a couple of older kittens who were in a spot of bother.   I don’t know the full story but two 6-8 month old female kittens had been living rough, and hadn’t been spayed which had resulted in all the un-neutered toms from a several mile radius converging on them, and the poor little girls crying and running up trees to try to hide.   Fortunately for these  girls, they had landed in the garden of a delightful elderly couple who took pity on them and with the help of the rescue were able to trap them.

The girls went off to be spayed and we brought them here to get over their ops whilst plans could be made for their longer term futures.   They popped out of their carriers into their (my) bedroom, were offered the vet recommended light meal of chicken following their ops, and then left to relax and get over their ordeal.   The following day  only one kit could be seen, lurking under the bed.   If we’d lost one of our rescue cats it would be a nightmare, but to lose a cat entrusted to us by another rescue is nightmare x10.   We ripped everything out the wardrobes … twice .. and then three times … took all the drawers out, stripped the bed, and the comfy chair … everything came off the book shelves, torches shone into every dark corner – much to the discomfort of the other poor kitten.   Every time the torch picked up her face I could see it weighing up the pros and cons: randy tom cats v what’s happening now: and I could see it wasn’t stacking up well for me.

It’s not the first time we’ve had this kind of panic.  The first was when we brought four Norwegian forest cats home, put them in their bedroom and an hour later could only find three: 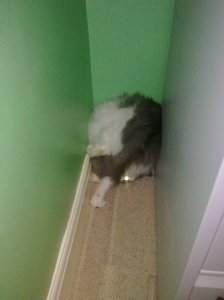 Frodo had managed to wedge himself in inches between the filing cabinet and the wall.  The photo was taken after we’d moved the cabinet (which meant taking all the books off the bookcase next to it … and then dismantling the bookcase), but you can see a line on the carpet of where it had stood at the point when we found him.   George also disappeared within minutes of his arrival

but was found wedged behind the toilet.    Similarly after Bailey, Barney and Bella arrived, I went up to check on them and one of them was gone – found later to have slid under the chest of drawers.

So we checked all those places, but no sign of her.  Anyone who’s been here to adopt cats will know we have a careful, verging on OCD system of checks with doors.   This little one would have had to slip past 3 doors to be able to get outside, almost impossible and never managed before.  But we couldn’t find her in the house, so what can you think?

Hard not to think the worst.    It was blowing a gale and throwing it down with rain.   If the little one had somehow got out it didn’t bear thinking about.  So then lots of trailing up and down the road not quite sure what to do.  She’d not recognise the house, my voice, any name I called her.  Vaguely hoping I could project the image of a tasty sardine to attract her.  No joy.  Tearful, guilt ridden messages to the rescue.  Utter despair.

I popped in just to check the remaining kit was ok before bed, and there they were TWO of them!

Next morning I went back to serve breakfast and only one again, and only one when I got home from work.  Did I dream there were two?   After various searches and questioning my sanity we found where Edna had been hiding:

Right up at the back of the shelves between the wardrobes, behind Hiphop the hiphophotamouse.   Too high up to be able to see her, hadn’t been disturbed by my moving the teddies, and amazingly had got up there without disturbing the curtain (she could teach the residents a thing or two

We’re all happy now.  Echo is under the bed still but purring lots and enjoying a fuss.  Edna has made her way down from the heights.