breaking up and making up

It’s been a tough week for our love birds Lyra and Mowgli.   The honeymoon is over, and motherhood is wearing thin for Lyra.   There are still lots of nose bumps and head butts between them, but every now and then a screaming row will break out.   This was obviously causing a lot of distress to both of them, and they clearly needed some help.   My professional skills are mainly in individual psychotherapy, and most of my patients do not have pointy ears and whiskers – so couple counselling with a pair of discontented felines was a bit of a leap of faith. 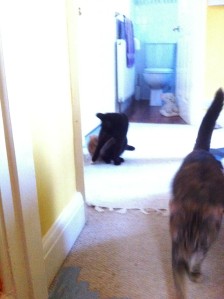 It took a while, but eventually we established that the main issues were around kitcare.   Lyra described feeling as though she had 6 kittens rather than 5 little ones and a partner.   Not only did Mowgli not really pull his weight, he was too enthusiastic and rough in his play with them and didn’t seem to understand that they were only 4 weeks old.   She also felt that as the kittens were starting to be weaned her hormones were changing and that oxytocin rush that made her love everyone unconditionally was wearing off rather rapidly.    Mowgli just shuffled around a bit and said “um … er … ”  and then wandered off to play with his squeaky mouse.   Lyra shrugged.  It was easy to see her point of view. 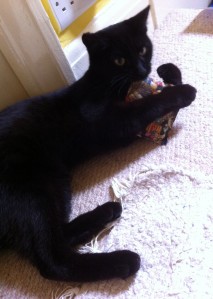 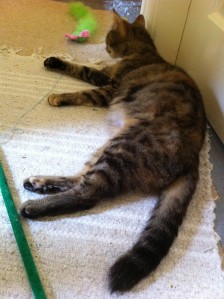 In the end they agreed to a trial separation and poor Mowg was sent packing.    He moved into my bedroom, whilst I and the residents slept downstairs.    I say “slept” … in reality we laid awake listening to the unhappy couple discussing their difficulties across the landing, and through two doors.   “I’m sorry babe …. I’ll change …. take me back”  “Mowg I love you but I can’t have you pushing our Lenny over … he’s too little for that … how do I know I can trust you again”  “Please babe, I’m sorry”  “And anyway, what’s going on with Arwen?  You’re too interested in her kits”  etc etc.  Somewhere in the middle of this Arwen was shouting and cursing the pair of them as she was desperately trying to get the A Team settled down and off to sleep. 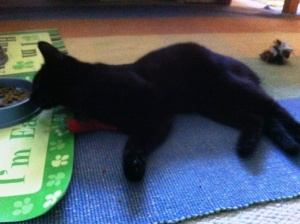 no appetite alone in his bedsit

Since then we’ve organised supervised access.  Mowgli is doing his best to help.  He carefully watched Largo and Legato when they were playing too near the top of the stairs, and cleaned little Lily up beautifully …. thereby earning a few brownie points.    When they’re separated they talk constantly through the door to each other.   We’re hopeful that long term this relationship will make it, despite a tricky patch whilst the children are small. 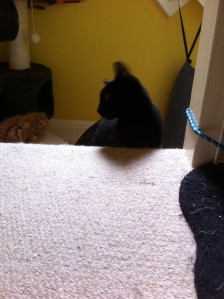 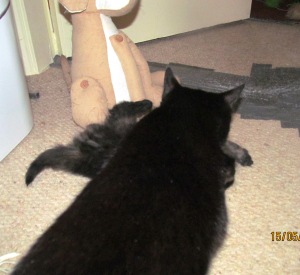 One thought on “breaking up and making up”