an open letter from Merlin’s dad

I know many people followed the story of Merlin back in January – his anxiety in rescue, his fear of other cats, the huge progress he made once he went into a foster home where he was the only cat, and finally found himself a lovely new furever home of his own. His new dad is lovely, and funny, and sends me updates of the lad’s progress. The letter I got last night made me laugh and is such good news I got his dad’s permission to share part of it here:

“Anyway on the subject of ‘Lord Merlin’ I thought that I’d give you a quick update as it’s nearly two months he’s been with us.

In nutshell it’s all good, certainly from my perspective and I think Merlin’s too because he has not voiced any complaints so far. He had been with us about ten days when I took the decision to see how he went on going out. If I had any concerns I needn’t have worried. Merl being Merl he’s a cautious chap, so slowly and methodically checked out his garden, never roaming out of it for the first week or so. In that week he drew the attention of a little long-haired tabby who lives at the back of us and she started turning up daily to see ‘if Merlin’s coming out to play’! One thing that did become apparent was that Merl quite possibly hadn’t been out and about very much at all in his life. I say this because on a scale of 1-10 (1 being the worst) in overall cat outdoor skills, he was a definite 1! He struggled to climb and on several occasions even fell off the fence (I kid you not). Compare this to his ‘girlfriend’ who was a definite 10 in climbing prowess. She definitely wears the trousers in the ‘relationship’ but I’m happy to say that she has encouraged Merl to do what cats do and he has moved up the scale being about 7 or 8 now. 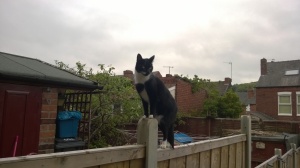 His new found freedom has been helped by my fitting a chip controlled cat flap to the back door, this he now freely uses but again due to his cautious nature it was met with great suspicion when I put it in. It was also a big struggle to get him to pass through it to programme his chip to it. It involved him shouting, screaming, hissing and him pushing his legs against the door totally refusing to go through the flap. I ended up having to wait for George to come home, who then sat on the step outside with a bag of Dreamies to tempt Merl out while I programmed the hatch. Got there in the end and now he’s in and out of it without thinking- that’s Merl for you.

In all seriousness though he has gone from that ultra-nervous boy that you will remember, to a lad that has made himself totally at home here and is quite confident now. He still doesn’t like being picked up, although I admit to making him have it sometimes when I fancy a cuddle- he growls a bit but tolerates my indulgence. He is though very affectionate in other ways, such as flopping at your feet and demanding his tummy is tickled. He has got an igloo in the living room now which he uses during the day. At night he has set up camp on the bed, lying on his fleecy blanket and he kindly lets me sleep in the bed too! Actually he goes out normally until about 4 in the morning when he returns and then lies in until midday- he seems to have taken his cue from George in behaving like that?

He’s actually become a favourite with the neighbours too, who have made a big fuss of him. He has annexed the gardens either side as his playground and had made moves to walk in at the noisy ones next door but ran out scared when the budgie squawked!! The neighbour the other side looked after him for a night over Easter when I was in Wales for an evening out. Both have volunteered their services if I’m ever away again- which is good. “ 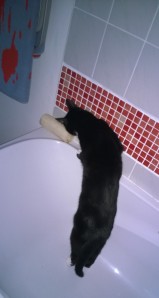 I think one of the reasons I love this so much is that it’s so recognisably Merlin in many ways – whilst at the same time he’s grown so much in confidence that he’s virtually unrecognisable.  Who’d have ever thought that Merl would have a girl friend! 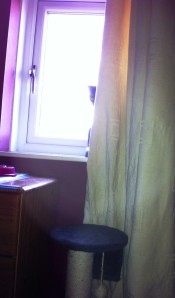 merl when he first arrived here