Posted on February 26, 2015 by accidental fosterer

We’re currently blessed with two of the cuddliest cats we’ve ever had in rescue.  Both Dorothy and Jack just love to snuggle and respond instantly to the cue of me sitting down in their rooms by coming over for hugs.   Both have spent years living rough prior to coming into rescue, and its sad to think how long they’ve gone without the love and affection that they crave.  Neither show any inclination to use their interactive time for play ……. its all about loves.

So we’ve spent quite a lot of the last few weeks doing furry cuddles, and reflecting on different feline snuggle styles.

Dorothy is visibly ecstatic at the prospect of a cuddle and races over to me, even if she’s not quite finished her supper .. which she loves.   She seems to prefer to lay next to me rather than on my lap.  It’s a very excited cuddle, loud high pitched purrs so insistent that every now and then she has to stop and gulp for air.  Paws waving around and frantically podding at me, little pink tongue sticking out.   She loves lots of strokes and tummy rubs, just can’t get enough fuss and snuggle time. 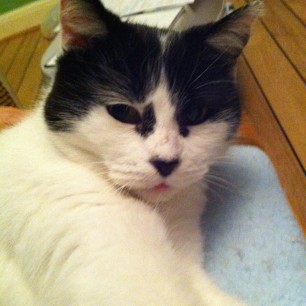 Jack on the other hand, casually (though instantly) lumbers down from his perch on the windowsill and onto my lap.  It’s not easy to describe what he does from there, but he kind of stands up and throws himself sideways at my chest so that I have to catch him in both arms.  Then his head comes up to butt against mine.   He leans into the cuddle, slowly purring and podding at me, until suddenly he jumps up.   Given that he hissed a lot when he first arrived and his cuddles took me by surprise, this sudden movement startled me initially ….. until I realised that its only ever so that he can throw himself at me again to get closer hugs. 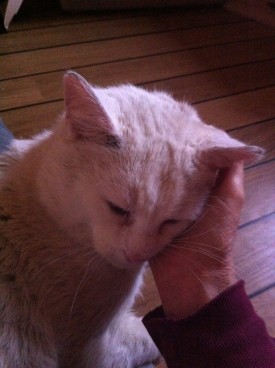 Dorothy just can’t wait until she can have a home of her own and have snuggles all the time.    She finishes her vaccinations early next week and is “good to go”.  She would be a perfect addition to any sofa 🙂    Jack will also be available for adoption in the next week or two.   He’s seriously cleaning up his jacket (and making a very good job of it) ready to make a good impression on anyone interested in offering him a life of luxury.   If you could offer either of them a cuddly home please get in touch 🙂

One thought on “Thinking about cuddles”