When negative is positive

Posted on March 13, 2015 by accidental fosterer

We’ve talked before about all the angst and dilemmas in deciding how to care for Jack.  One of the greatest fears, and one we didn’t even dare mention before, was that as a long term stray, he might have FIV.   Our only previous experience of this was trapping another stray cat from the same allotments Jack had come from, who had a nasty abscess on his face.  We named him Jaws because of the size of his face, before sadly realising it was swollen because of the abscess.  It was before we were a rescue as such, so took him to a vet (not our current vet) who passed him on to the RSPCA.  They made him comfortable with the abscess and then tested him for FIV and the test was positive.   I had a phone call from the RSPCA telling me this and asking if he was my own cat and if I was willing to agree to take him home with me and keep him indoors forever after.  If not they were going to put him to sleep.   No, he wasn’t my own cat, no I couldn’t commit to taking in a cat I didn’t know who had a disease I didn’t know anything about but which sounded as deadly as ebola the way they spoke of it, and also I was on my way to pick up a pregnant foster cat, so didn’t have space to take in another cat.  [Pregnant puss turned out to be the mum who gave birth to our Flipper – but that’s another story] 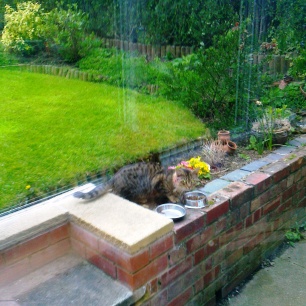 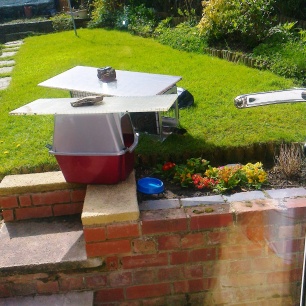 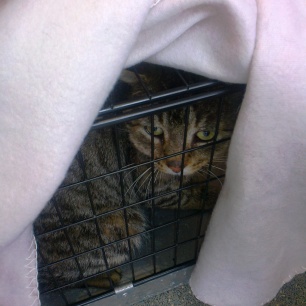 waiting at the vets

With hindsight, or at least “knowing then what we know now” we might have been able to save Jaws. It’s haunted me that in our trying to help him we in fact sent him to his death … despite RSPCA saying it was for the best and that he’d have had a dreadful time living rough and dying with abscess etc. That scenario and the fear of a repeat of it has been in my mind since the moment I brought Jack indoors, not least because I knew that Jack was around the allotments at the same time as Jaws, and if they’d fought Jack could well have it too.

Thankfully, this time several things were different. We asked the lovely Wizzcatz Rescue for advice and information. She shared this really useful link , we started to understand more, took a deep breath, talked to the vet about getting Jack tested, and committed to sticking with him and caring for him whatever the outcome.

So off we went to the vets for Jack’s blood test.   They took him through to the back and returned him quite a while after, unable to get the needle through his ridiculously tough skin.  Not sure I want to picture the scene … he’d not lifted a claw against them but was described as “willful” …. my guess is that he’d been focused on having a fuss rather than keeping his head still.  So we went through it all again the following week.  I’m not clear whether they’d ordered in some rhino needles to do the job, or whether he was just a little more co operative, but it went smoothly this time.    The phone call came through a few days later ….. he’d tested positive on the first screening test, but our lovely vet said that the last few cats he’d tested had been positive on that initial test, but on a more accurate second test were negative.  I wonder if that initial test was all poor Jaws had.  Was it too much to hope for that our fears would be reversed on the second test? 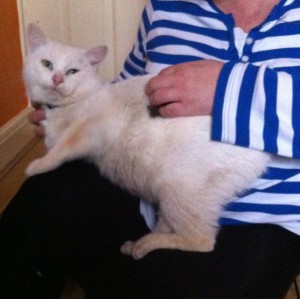 Jack had so obviously set his heart on having a home and family of his own.  He’d cleaned his fur up, gladly worn a collar and been groomed to show how reformed and respectable he was.  How on earth might we break the news to him that there was a serious set back?  Dr Tim phoned whilst I was at work on Monday and I phoned back … hearing my heart banging whilst they put me through to him.  The second test was negative!!!!!!!!!!  YAY!!!!!!!!   Jack is free to pursue his desire to find a home of his own with a clean bill of health.

Whomever gets to adopt this boy will be one lucky person/family. 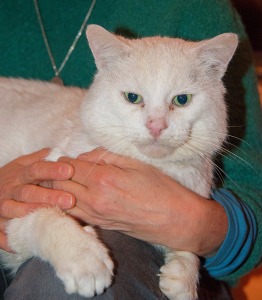