The return of the N key … and other short stories

Posted on October 30, 2015 by accidental fosterer

We’re very relieved to have had a new N key (plus hinge) arrive through the letter box a couple of days ago, and expect our readers are too!  The little E Team are still very keen on following the IT module in their kitten socialisation course … but since Elijah’s little accident have been asked for form an orderly queue on my lap and take turns on the keyboard. 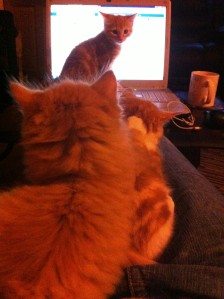 Their mummy is doing well at Sheffield Cat Shelter and is advertised for adoption on their website.   I think she’s enjoying having some space, and her little ones are definitely coming out their shells much more now they’re not being slapped by mum every few minutes.   The older kittens have welcomed them into their gang for playtime, and cuddles, and my adult residents (normally a grouchy lot) have been there to mother them a bit when they’ve needed.  Thanks especially to Honey, our only resident who has been a mum for stepping up to the line on that one.

Readers with good memories and considerable stamina will perhaps remember the series of cat flap saga posts, as we switched between the pet porte microchip cat flap and the sure flap dual scan flap (with a diversion into the pet porte ridiculous sized all singing and dancing flap along the way). We thought it had all been resolved a few months ago by having a hole put in the other door of the patio doors and having both installed, one in each door … the Pet Porte one permanently locked so our old lad Sooty could be kept indoors, but available as a safe entry that our semi feral cat Amber would trust as she’d been terrified of the sure flap when we installed that.  Whilst the  Sure Flap one would allow out just the cats we’d scanned to be allowed outdoors.  In effect it became a bit of a one way system as no one seemed to want to use the Sure Flap to come in.

It all worked pretty well until one morning when I got up and Flipper wasn’t home.  I always get them in when it goes dark and lock the cat flap so they can’t go back out.  I was certain they’d all been in before I went to bed … I can’t settle to sleep without knowing they’re all home and safe ..  but thought perhaps she’d slipped out when I’d opened the door to call Amber in, or maybe even that I’d mistaken Amber’s tabby stripes curled in an igloo for Flipper’s … but it seemed a bit unlikely.  They were all home the next night so I put it to the back of my mind.  However later in the week it happened again.  Flipper was out when I got up.  This time I was 100% sure Flipper had been in when I went to bed, but only 90% certain of my sanity.  I tried pushing on the flap when it was locked and couldn’t see how she could have got through it without breaking it.  I started looking for none existent windows that I’d left open, and imagining holes in the wall or the floor that I’d not previously noticed.

rather grumpy residents locked in for the night

In the end I wasn’t sure whether to contact Sure Flap or a psychiatrist. I opted for the former. I was surprised to get a very prompt and helpful reply saying that: “We do know that a very small percentage of extremely clever and persistent cats have been able to ….. hold the grey catch down and simultaneously claw the door open inwards.” Much as I love her, I’d not really had Flipper down as “extremely clever” but I will give her “persistent”. Customer Service took the serial number of the flap we have and assured me “Our design team have developed a solution to this which we would be happy to send out to you”. I waited for the arrival of some sticky tape, or something to put across the front of the flap so it couldn’t be pulled inwards. However a week later a complete new cat flap arrived with the legendary label “thumbproof”!

Let’s see what the little monkey makes of that!