Posted on February 17, 2016 by accidental fosterer

When the little W Team came to us in November last year, although they’d needed to be caught in a cat trap, we hoped they were just anxious and would settle soon enough.

After a few weeks it became apparent that mummy Wilma was no way no how going to settle to an indoor cat life, and you might remember that she went off to a lovely outdoor rural home in Derbyshire.  Little Winnie went the opposite way, broke ranks with her hissy sisters, and became a big snuggle bug.  Here she is helping us with one of our younger kittens, just before she went off to her new home.

So that’s the two extremes covered.  Now what to do with little Wispa and Wynter, the other two less confident kits?  Are they to follow their mum or their sister?

Over the weeks / months  the pendulum has swung back and forth …. and continues to swing.   It’s seemed hopeful, impossible, just maybe, probably that they will settle to a life with humans, and we keep changing their adoption advert to match the current predictions.  It was hopeful when Wispa started to come out to play, and then a brief surge of hope when Wynter joined her.  Only to despair when Wynter’s foray into games appeared to be a one off.

Wispa continued to play out, but wouldn’t be touched.   Wynter resolutely hissed when we spoke to her … though it’s become kind of a cute habit as she’ll hiss, take a treat from my fingers, munch away happily, and then hiss again when offered the next treat. 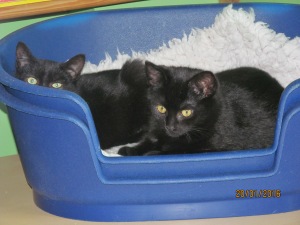 Just over a week ago, Winnie went to her new home and on the same day her sisters went off to be spayed.  We’d pretty much resigned ourselves to the idea that once the girls were over their ops we should start looking for an outdoor home for them.   They came back from their ops not surprisingly even more anxious than they were previously … and for various reasons were moved into our other rescue room.

It’s a smaller room, with fewer places to hide, but with lots of shelves on the walls so you can climb up to the ceiling … which the girls very quickly did!   Things changed then though.  Whether it was the change of room, the adjustment of hormones, being brought home from the scary place at the vets, not having a much more confident and bossy sister around …. who knows? Things were different though.   For one thing …. Wispa has started to purr …. loudly …. and her body language changed … so she’ll greet me with a head on look, tail up …. just like Winnie did.  She won’t be stroked easily … but will take treats from my hands and loves to play.  Wynter has also changed …. she’s more ready to come out to play.   She still hisses when I offer her a treat … but will take it happily from my hands, and of late has been fine with having her head stroked a little whilst she’s eating it.  She’ll still hiss again before the next treat though 🙂 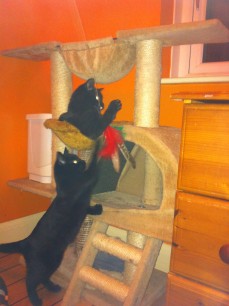 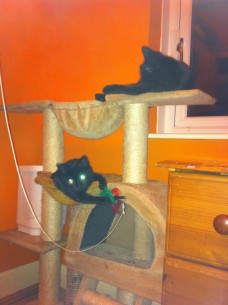 The body language of these two is so different from what it was a couple of weeks ago, arms outstretched, rolling over, playing etc … makes me think again that there is hope for them living in a patient home rather than needing to go to live as outdoor cats.