Posted on February 25, 2016 by accidental fosterer

After our rendezvous at Donington Park a couple of weeks ago, we kind of got the travel bug 😉   So when a Mablethorpe based cat posted, in distress, on Sunday we offered to help. Poor little Molly Mable had had a wretched week.   She’s nearly 13 and had lived with her human since she’d been a kitten.  Then the worst of all furry nightmares happened:  her mummy died.   Molly Mable hid inside the base of the bed wondering what on earth was to come next.   A week later, when the family were looking for the will, she was discovered.  We dread to think what might have happened to this elderly puss if an over full Lincolnshire rescue hadn’t stepped in and taken her over night.

The plan for the following day … both the Lincs rescue and I were busy .. was to message each other once we knew what time we were going to be free … and then meet to hand over Molly.   It was more complicated by my being in Nottingham for the day … so different journey and traffic to account for.   There were various potential meeting points: Newark, Lincoln or Mablethorpe depending on which of us was free to set off first.

Eventually a meeting point was set: Asda south of Lincoln.  The  Lincs rescue suggested “at the petrol station” so we could find each other apart from the rest of the huge car park.    I arrived early and whizzed into the store for a few shopping bits and then headed off to the petrol station.    There wasn’t a lot of space to park unless you were filling up with fuel, so I settled into a spot just behind the “free air” and tyre pressure machine.   The appointed hour arrived, and shortly after that a young woman pulled up behind me.  She looked a little uncertain, but smiled and waved.  I also smiled and waved.   It was very like picking up Knut & Kitty at Donington.    I  got out of the car, got the cat carrier from the back seat and went over to her.  Something … what was it? … just something made me not so sure.   She looked a little worried and unsure.   It just wasn’t right.  She got out the car … saying “um … was just wondering if you were waiting for the tyre machine?” ….  “er …. no … I was thinking you had a cat to hand over to me”.  I’ve gone away and written a blog post about the experience.  Goodness knows how she’s dealing with the confusion.    I moved to a different part of the car park, sending a message to the other rescue at the same time..   A little while later another young woman pulled up not far away … with a similar sort of look..  I made sure that this time we exchanged a couple of messages before getting out the car! 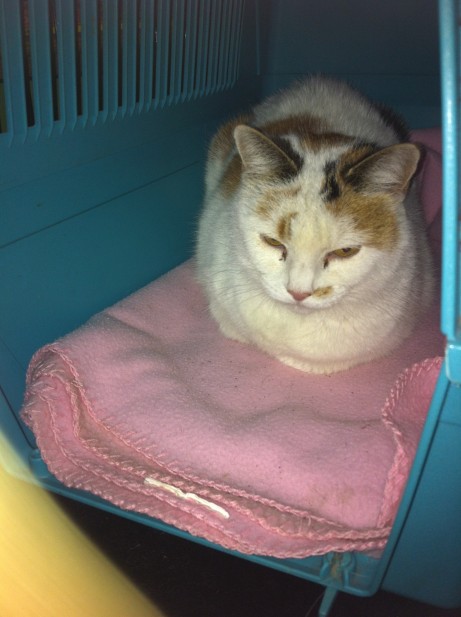 Molly was an excellent, calm passenger who navigated far far better than the Ks did.  She purred and fussed and cuddled when we got home.    Apart from asking where the beach was, and why Sheffield roads were so bumpy she was just purrfect.   However she just would  not eat.   Everything we tried was rejected other than a couple of dreamies.   It seemed she’d eaten a fair bit at the first rescue when she’d arrived on  Sunday evening, but nothing since.   We struggled to get any food down her .. but grabbed the earliest vet appointment we could.    Molly’s teeth were ever so sore, and bled just on being examined.

So today she’s been off to the dentist.  At least 5 teeth out as far as we can tell.  Mainly her top teeth.   She refused to eat anything at the vets when she came round from her op.    Thankfully, with quite a bit of encouragement, she’s been eating since she’s got home.

All we need now is to find this poor old lady a furever home.