Posted on January 21, 2017 by accidental fosterer

We’re building up to having some work done on the house, and last week were given a start date for late February.  Very sensibly we immediately declared that there would be no further arrivals until the work was finished.    Half an hour later we were making arrangements to  pick up Jensen.    He’s an older kitten who had been rescued from someone who wasn’t caring for him months ago .. but dogs and a new human baby whom Jensen was over enthusiastic about meant that he was in trouble again.   Nothing really that he was doing wrong, just no respecter of anyone’s personal space.

Yet another Leeds based cat, though thankfully this time his family were happy to meet me part way. Woolley Edge Services on the M1 seemed a good half way point … though not exactly ideal as I waited on Northbound while Jensen waited at Southbound. He was in the most amazing packaging …. a crisp box with all his worldly possessions strapped to it.

It was ingenious and creative …. but in the interests of safety we had a bit of a back seat manoeuvre to transfer him to a proper carrier that could be hooked up to the seat belt.

Although he’d been a confident kit in his previous home, he was shaken up by the change and quite overwhelmed by all the other cats here.  He ran off to hide and we spent several hours poking around the hidden dark corners of the house with a torch looking for him.   Eventually it was Flipper who sniffed him out, wedged behind the cabinet that the printer stands on.

Each day since then, things have got a bit better. By Sunday he was hiding on the window sill behind the curtain, where he could peek out and see what was going on. By Tuesday he’d staked out the conservatory as his domain, still hiding behind plant pots, but amenable to coming out for treats and had started playing a little with Rufus. On Wednesday he came into the lounge looking at the TV and happy to settle near the toys, so long as no one moved.

On Friday I started to be able to coax him to come to me, and he’d have lots of enthusiastic strokes, but still would scuttle away shortly after. He was playing more with Rufus who is very confident so I hoped they’d have some kitten to kitten chats. It looked hopeful as rather than hiding, I’d walk into a room and he’d be lounging in a hammock or comfy bed, though he’d soon move when he saw me.  He’d come to eat with the other cats at meal times, and  was clearly interested in me …. sneaking a look at me when he thought I hadn’t noticed. 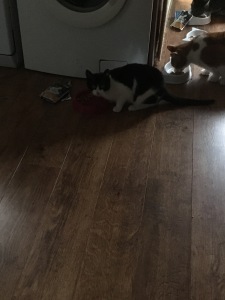 So this afternoon it was disappointing to find he seemed to have hidden again. To be fair though … I’d been quite caught up in “tail 2” ….. and had had the vacuum cleaner out.   However this evening it was like a switch had been flicked.   I sat in the chair and he came running to climb on my lap.  I tentatively stroked him, not wanting to scare him.  He threw himself at me wanting all the cuddles and snuggles he could get ….. at least a weeks worth to make up for having lost bless him.