Last bank holiday monday we took in a tiny kitten, Mathilde. How exactly she came to leave her mum remains a bit of a mystery. She’d clearly been well cared for prior to her arrival as she was (is) a chunky little kit, and was (but isn’t quite so much now) very clean. There are a few things we know for certain: she’s adorable, she’s very well travelled, and she’s a little madam. 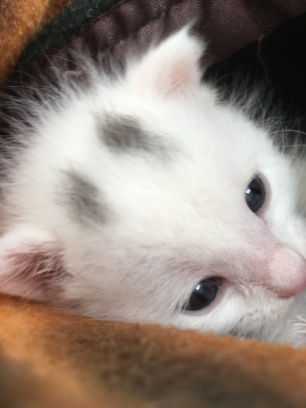 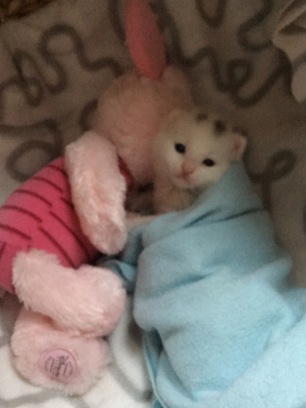 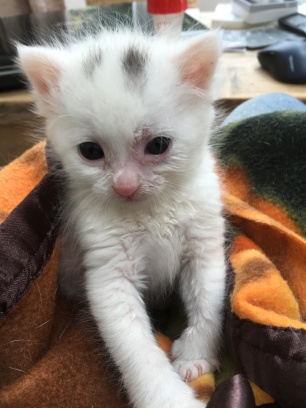 I collected her from Ilkeston on the bank holiday monday. She’d already travelled a long way to get there. The Tuesday, day after she arrived I had day off and had arranged to meet ex colleagues for a catch up. So she travelled to the Tara Buddhist Centre, south of Derby for lunch and back into the centre of Derby to natural therapy centre for afternoon tea. Whatever in deep and meaningful conversations we’d planned were scrapped in favour of cooing over her and sorting out her bottles.

It’s maybe not a bad thing that we were out a lot.  The residents are unimpressed to say the least.   Rufus (our last hand rear kitten … now almost two years old) is particularly put out. Having been mummy’s (and aunty Jenny’s) baby boy for a couple of years … the arrival of a new baby is hitting him hard. 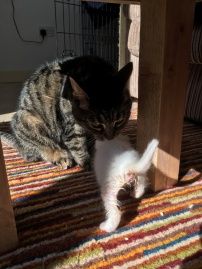 Flipper … who knows what she thinks?

Thankfully aunty Jenny has been there for us just as she was with Ru, and we’ve done the same pattern of shuffling Mathilde back and forth to fit around my work.   Who would have thought that one so small would need to travel with such an enormous amount of stuff?

The cats at Jenny’s aren’t too impressed either. The saving grace is cousin Oliver. Whilst cats are hard wired to do just what the hell they please, border collies are more able to think about the bigger picture and manipulate people by pleasing them.  He’s considerably better at cleaning her than I am, and Mathilde adores him.  Of all the furry people she’s met, Ollie the Collie is the only one who has been pleased to see her and happy to let her snuggle. 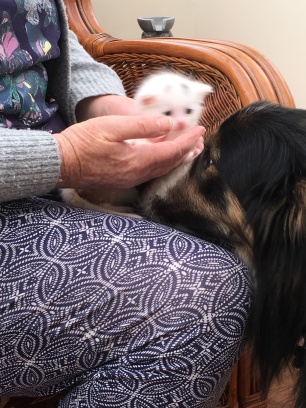 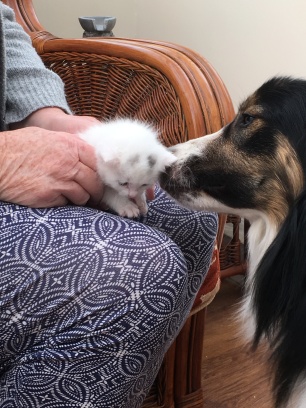 There have been some anxious times when its seemed she’s not putting on weight, but she’s an active and noisy little madam. She soon got close to climbing out of her baby cot and moved into a bigger bed … which she’s found she can climb just as well.

climbing out the cot

Her feeds have changed from gently trying to get the teat into her mouth and encourage her to have a few ml to her squealin when hungry, almost grabbing the bottle out of my hands and drinking it nearly dry before coming up for air. Check out the ears!

It’s fascinating to watch her gradually working out which limbs belong to her and what she can do with them. 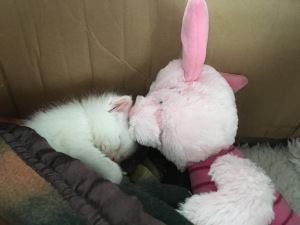