and then there were three

Posted on June 1, 2018 by accidental fosterer

Regular readers will have got the gist of how stressful it can be around here.   It’s pretty much full on with caring for the cats … and when you add in the full time day job …..  well ….. it’s at hair tearing capacity much of the time. 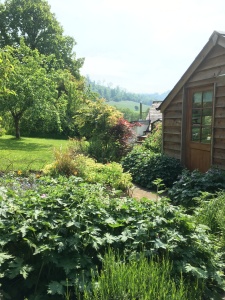 Having not had a day away from the rescue since October last year …. we set about looking for a short break.  The perfect option was found on airbnb near Ludlow: a quiet garden studio in the grounds of a house well off the beaten track.   A two night booking was made for ONE person and accepted, and the cat sitter booked.   I was excited to have the opportunity to visit an area I’d not explored before.  Started googling “what’s on” and walking options.

And then …. only a few days later … the first bank holiday monday in May ….  little Mathilde arrived in rescue.  I’d said “yes” to taking her without any calculation of dates or development… thinking only that she was a tiny kitten who needed someone to care for her and we could offer that.  Then realised she’d be about four and a half weeks at the holiday date and most likely not yet weaned.   It wasn’t clear if she’d survive at first so I held my breath and said nothing.  Thankfully with the help of aunty Jenny we managed to raise her to at stage where she was strong and viable.

Hmmm ….. now what to do?  Cancel my holiday?  Take her on holiday and try to conceal her?  Cash in more than my fair share of child care points and ask aunty Jenny to have her?   I took the path that I thought would lead to being forced to cancel.  I messaged the people who owned the place I’d booked, explained the situation and that I thought I needed to cancel because of Mathilde …… though if they thought it was at all manageable  to bring her with me … then I’d still love to come.   Then kissed my deposit goodbye.

Amazingly I got a lovely reply saying the TWO of us would be welcome so long as she behaved herself.   So we started to make preparations.  A long long list of necessities was gathered together.  Some of the basics were easy – with her going back and forth to aunty Jenny’s every few days: feeding bottles, kitten formula, bottle brush, blankets, spare blankets, spare spare blankets, heat pad, litter tray.  The list assumed that aunty Jenny had a bowl to sterilize bottles in, poo bags, rubbish bags, kitchen roll, baby wipes, toys, towels, hair dryer etc.  but we couldn’t assume the holiday accommodation had any of these.   So the list of stuff got longer … and longer.

Then Mathilde started showing an interest in solid food …. so the packing list extended to baby rice, pouches of kitten food, kitten dry food, feeding bowls as well as bottles.

And then …. the day prior to leaving I had a day off, planned a leisurely day of gathering stuff together, chilling a bit and looking forward to holiday. Granted I got up rather late, but the phone pinged before I’d put the kettle on.

Before I’d finished drinking my coffee, little Mollie had arrived.

Weaned or not we could hardly leave a 5 week old kit home alone. Would she get on with Mathilde? Hardly time to find out before setting off so had to take a second play pen in case they needed to be separated … and double up on other stuff too.

Anyway, the day came and off we set.

I’m not sure if the journey properly qualifies as one of my all time worst journeys with cats … mainly because it wasn’t predominantly the cats who were the problem.  Vile weather, road works, bank holiday traffic and a temperamental sat nav were the worst of it.   Having timed their feeds to the last minute in the hope that there would be no need to stop, we were so delayed that we ended up in a service station somewhere on the M5 😦 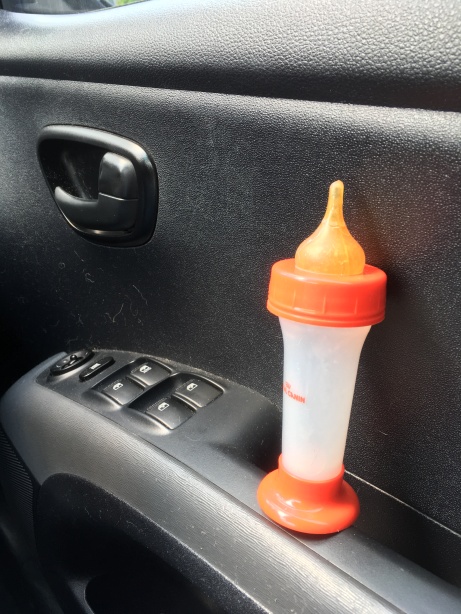 The good news was that Mollie had taught Mathilde how to eat some solid food. The bad news was that it was just dry food and I was anxious they would dehydrate.   So had to prepare bottles of formula for them.  You know how awkward it is to manage your flask of coffee and mugs and milk in a small car?  Well its kind of like that but with more squealing!

Back on the road and finally within reach of our destination.   Living in the city I’m used to addresses with a house number and road name, however what we had was a cottage name and a post code.  The sat nav took us several miles down a very narrow windy lane then randomly announced “you have now arrived at your destination”   I swear I heard it mutter “good luck” and shuffle off leaving me to it.

Anxious to present a positive image of a good fur parent, and to break the news that the booking was now for THREE … I’d had visualised myself as capable, calm and organised, stepping out the car with two beautiful pristine kittens.  The reality, as ever, was different.  I’d been lost, tired and tearful.   The kittens had digested their service station snack, deposited the waste on the floor of the carrier and then rolled around in it.  They stank and were squabbling.

To their credit our lovely hosts showed me around like I was a valued guest and didn’t mention that the kittens were caked in poo.  I guess we all have those times in our work when we think we’ve seen it all …. and then something completely different happens.   I think we went on to be decent …. albeit unusual guests … (we may or may not share more about how the holiday progressed in a later blog).  If nothing else ….. I hope it gives them a story to tell x