Tiny tails and stressful tails: the tough part of rescue (1)

Posted on September 16, 2018 by accidental fosterer

It’s been a really stressful couple of weeks here at 8 Lives.

A couple of weeks ago while I was out trying to trap the last of the Norton 4  I had a message from someone over in Doncaster.  They’d found 5 tiny kittens dumped in a garden.  They were so newborn that their placentas were still attached, and no other rescue was responding to their pleas for help.  Horrendous as it is, we can only conclude that these tiny ones had been ripped from their mum before she’d even had chance to clean them and sort out the after birth.  I’m heartbroken and horrified to think what a state mum was left in, but don’t have the resources or authority to try to chase this up.

I thought there was no way we could realistically help but I messaged my rescue friend Fi just in case she might care for them if we offered rescue back up.  To my amazement she said yes immediately.  That’s an amazing and huge commitment for 5 newborn kittens!  Newborns need feeding every couple of hours at least.  With five the chances are you’ll hardly have finished feeding, toileting and cleaning before you need to start the next feed.   Add into that the need to sterilize everything, make up fresh formula, wash endless blankets and you can pretty much guarantee you’ll be meeting yourself coming back by morning.

We got things together to help, the woman who found them did her best to care for them in the interim.  People tend to assume that rescue is our job and aren’t aware that we have employment commitments that run alongside rescue.  Nevertheless we both managed to get away from work a bit early the next day to go over and get them.  It was an awful day for everyone concerned.   Messages coming in through the day as one after another kitten lost its fight.

When we set off we were going for three surviving kits, but by the time we arrived there were just two. 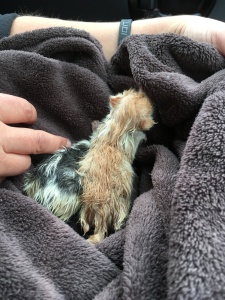 I called our lovely vets the minute we had them in our care and they fitted them into an appointment slot that they didn’t really have.   We dithered at the car, uncertain whether to put them in the carrier with their seat belt on for safety, or hold them on a lap and give them love.  On balance, weighing up the potential risks and rewards, we opted for lap cuddles and warmth.  I doubt the little tabby and white one would have survived the journey without Fi stroking her and rubbing her with a flannel and warming her.

Dr Tim gave them both some fluids as they were obviously both very dehydrated, and an injection of anti biotics since they’d had nothing of mum’s first milk to protect them.   They both perked up a bit and had a feed when we got back to Fi’s.

And then snuggled down for a sleep together.  Fi was all set to sit up all night with them.

I’d not been home long and fed and sorted all the cats here, when I got a message to say that the little tabby had lost her fight.  Really sad but if I’m honest, we’d been surprised that she’d survived long enough to get to the vets.  We had a bit more hope for ginger boy … he’d been more lively and kicking off a bit whilst waiting for his bottle.   A couple of hours later … the dreaded message …. he’d gone to join his sister at Rainbow Bridge.

The more years I spend in rescue the more I despair of people.  Their mum should be been spayed before any of this happened.  She was obviously an ‘owned’ cat to have her kittens flung into someone’s garden.  There are plenty of schemes for free or low cost neutering.  To cause a poor mum cat this distress … and have her possibly/probably go through it all again in a few months time … and leave tiny kittens in this state … is cruel and unnecessary.

The more years I spend in rescue the more amazed I am by people’s kindness.  Someone with no experience of cat rescue went and scooped these poor babies up and did her best.  Fi, who has lots of experience and certainly enough to know what she was letting herself in for, signed up to the task within minutes.  Our vets squeezed them in to a busy day and didn’t charge us.

Their foster parents buried them in the garden and marked the spot with this lovely little headstone.  Only a few hours in our lives but pawprints forever on our hearts.

You meet the best and the worst of people in cat rescue.