Posted on September 20, 2018 by accidental fosterer

You may have read some of the saga of Stanlie in a previous blog post: long tail of Stanlie.   There have been a few chapters in the saga since then … and will no doubt be several more.

We left the story where Stanlie was enjoying his snuggles but spending the nights doing howl-athon laments about his captivity.  Behind the scenes we were also stressing waiting for his blood results.  His history and dermatitis strongly suggested he may have FIV.

We were surprised and delighted when Dr Tim called to say the tests had come back negative for both FIV and FELV.  Obviously the dermatitis was still there but that could be treated with a steroid injection once his primary course of vaccines was out the way.

The hissing settled and Stan was very affectionate with me.  I was delighted when a friend visited and he extended that affection to her too as it made it hopeful he’d be able to build a positive relationship with an adopter at some stage. 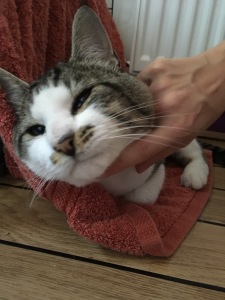 The long night time lament continued though.  I could completely see where he was coming from.  A cat who had been almost always outdoors and free, cooped up in a small room on his own most of the time.   Yes it was warm and dry and there was plenty of food, but that clearly wasn’t sufficient compensation.   It was only temporary … but of course there was no way Stanlie could understand that.   At the same time I was worn down with no sleep and wondering what on earth to do.  If he hadn’t needed to complete his vaccs and have his paws treated I may have just put him back outdoors and hoped our friendship hadn’t been permanently damaged by this period of captivity.

Then out of the blue, an email from Harold’s adoptive parents.  They’d been following Stanlie’s story and were aware that Harold and Stan had met on my doorstep some months ago.  They wondered if the boys would get along and if they might adopt Stanlie as well.   Hopeful but cautious I suggested they come over to meet Stan and see how it went.

A little to my surprise, but much to my delight, Stan was bowled over by the experience of having two other people fussing him at the same time, and clearly approved of them.  He wasn’t ready to be adopted until his health issues were sorted, but we agreed I’d take him over there on a foster care basis.   He’d have more space there and more time with people, and the prospect of a purrmanent home there if he and Harold hit if off. 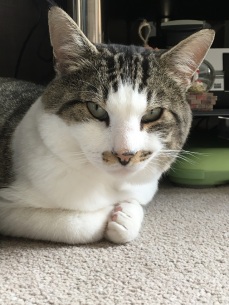 It was a big step up for Stan.  If he’d ever lived in a home it wasn’t for a long time … and this was very different from the basic bedsit he had here in rescue.  So many new sounds and experiences.  It went along ok for a few days.  Stan was stressed as he had been here, and although I think it was for the best, the move had also upset him.  There were hopeful happy moments of snuggles and other times of hiding under the table being miserable (Stanlie that is, not the foster carer).  Then a message to say his foster carers were dismantling the kitchen because they were sure Stan was in there but they couldn’t find him.  They’d been really careful with doors, they’d had practice because Harold was still in his probation period and not allowed out yet.  It was a bit odd though that Stan hadn’t been out of hiding whilst they were at work to eat or use his litter tray.  Either he was fast jammed stuck under the sink or he wasn’t there.

Then … late that night …. the awful realisation.  The dial on the cat flap had been turned to unlocked …
and Stanlie was gone.

We’ve had some difficult, heartbreaking and stressful times here at 8 Lives over the years.   This without a doubt makes the top 5.  Had he just fled in terror, running blindly into an unknown area, with his poorly sore feet?  Had he set off to try to get back to his old stomping ground around here, a 30 minute drive away?   Had I put so many hours into gaining his trust over the last several months only to make life worse for him?  Would I ever be able to forgive myself?