Posted on October 13, 2018 by accidental fosterer

Let’s have a break from the Stanlie saga for little while and focus on the kits we trapped up at Norton a few weeks ago. [If you can’t quite manage without your Stanlie fix … he’s still around and ok .. bit up and down .. but we seem to slowly be getting there]

The Norton kits were terrified after we’d trapped them.   They arrived and stacked themselves in the darkest most inaccessible corners of the room that they could find. 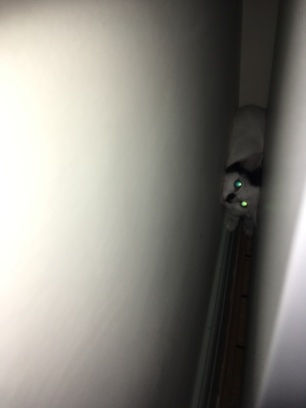 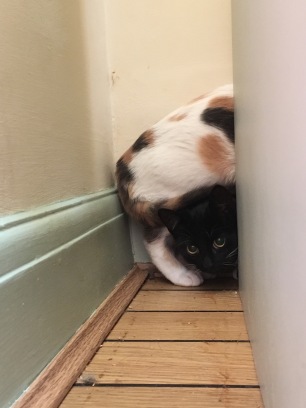 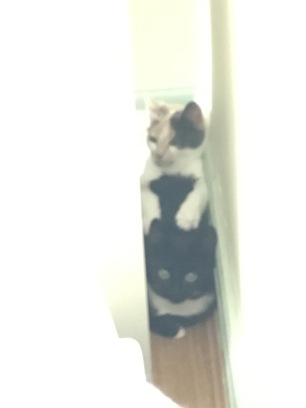 We made a little progress through food bribes, though it was slow.   We were very conscious of not having been able to get close enough to them to establish genders.   A mathematician would be able to tell you an accurate probability that all 4 were the same gender and that we’d be safe from ‘teenage’ pregnancies.   It’s not impossible … all four of the H Team are little boys.   However Murphy’s Law strongly suggested that this would not be the case.  We knew little Nancy was a girl because she’s tortie.  Two of the others were her size and the fourth cat was much bigger.  I thought when I first saw them that the bigger one was mum … but was assured that mum was tortie and had sadly moved on.    They’re around 6/7 months old, the kind of age when you really see a difference in size between males and females, and I suspected we had a tom cat and his three sisters.  It would have been nice to allow them to settle for a few weeks and take them to the vet once they were calmer and more comfortable with being handled, but I feared the girls would be pregnant if we didn’t act quickly. 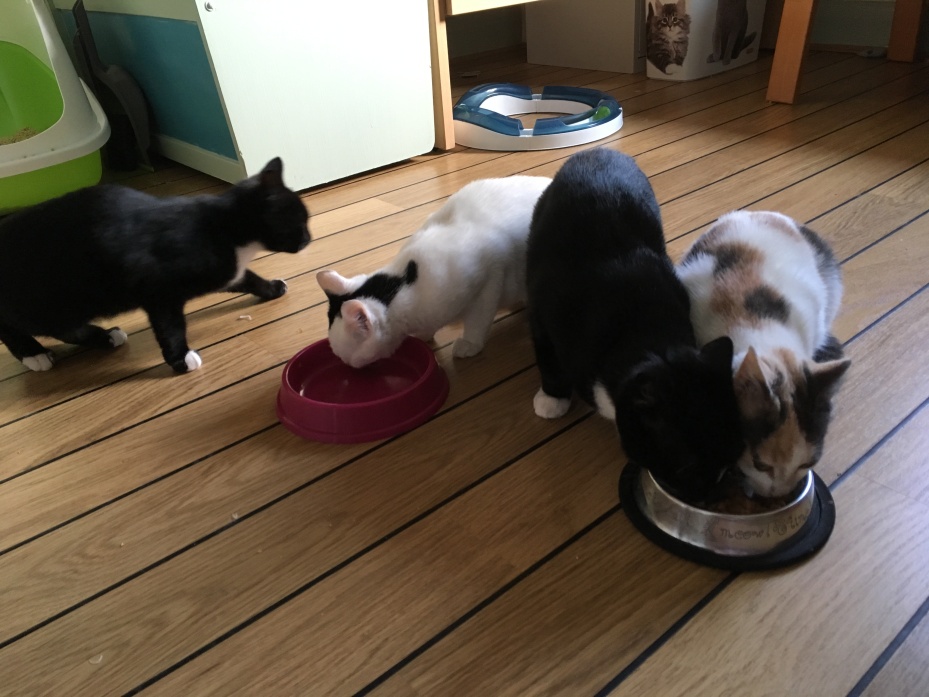 So we booked them in at our vets, two at a time, and booked for admission the night before the op because getting them into carriers was not a task to attempt on the way to work in a morning.   Both evenings were dramatic in their own way.  Even with two of us trying to catch them (thank you Fi) it was tricky.  We got Bandit and Nancy into carriers the first time round, and then had to manage flooded roads and backed up traffic to get them to the vets.  The second episode was on a lovely sunny day but was more tricky because we had to be more specific about who we caught, and we were after the two who had evaded the carriers the first time round.  Fingers was persuaded gently out of her hidey hole and into a carrier.  Dodger got heartbreakingly anxious and ran up the window and onto the curtain rail, howling as he went.   It was awful to have to pursue and eventually catch him.  There are no photos – too stressy and distressy to photograph.

Our suspicions proved to be right.  Dodger is a tom cat and the others are girls.  It’s a huge relief to have them all neutered now.  Huge thanks to all the lovely staff at Millhouses Vets4Pets for managing this tricky little crew.  At least now we can take our time building their confidence without worrying about there being more kittens on the way. 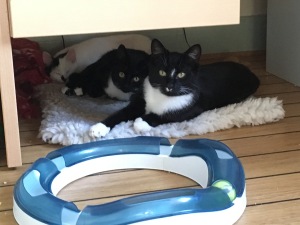 And their confidence is growing.   It’s awesome to watch it growing in different ways with each of them.

Bandit/Norton 1 in the order of trapping:  She hides when I go in the room more than the others.  At the same time, she was the first one I was able to persuade to take chicken treats from me, and the first I was able to touch. 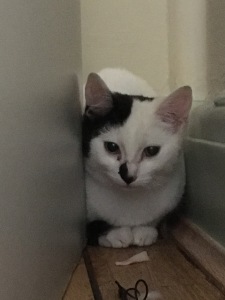 She wasn’t the first one to enjoy being stroked, and still often hides when I first go in the room.  However once she’s out, especially if there is chicken involved …. she’s very purry and affectionate.

Nancy/ Norton 2 is quite definitely the most confident of them all at the moment.   She was the first to really enjoy being stroked.  Initially quite reluctant, then enjoying it but wary of the hand coming towards her, and then just loving it.   She’s fully signed up to head scratches, tummy rubs etc.

Fingers / Norton 3 was initially the one who hid the most, but recently she’s been out waiting for food, whilst Bandit has been hiding.  She really captured my heart the way she watched Nancy and Bandit being more confident.  She sat a way behind them, purring loudly as I stroked them … as though she was enjoying it by proxy.   It reminded me very much of a neuroscience seminar I attended some time ago which talked about mirror neurons.  These neurons fire when someone observes another performing an action, almost as though they themselves were doing it.  Sure enough … a few days later, Fingers started the process of warily letting me stroke her, and gradually building up to really enjoying it.  The video belongs to an early stage in this process. 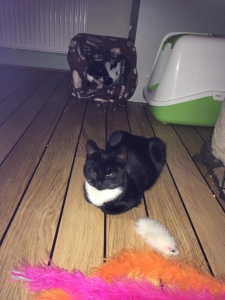 Dodger/ Norton 4 is an interesting chap.  Going right back to the trapping stage, we felt that in some ways he was the most confident …. he was heading into the kitchen rather than the trap for food!  In other ways he’s the most wary.  He’s always there in the middle of the floor waiting for his food … he doesn’t hide.  At the same time, he seriously does not want to be touched.  He was the last to be trapped, the most difficult to get into the carrier to go to be neutered, and gave the nurses the biggest run around when he arrived. 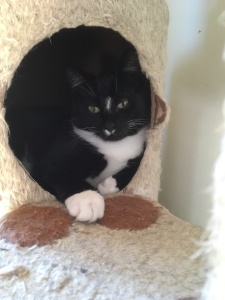 but adept at dodging the strokes