Posted on November 22, 2018 by accidental fosterer

You may remember the ‘holiday’ we had earlier this year … a couple of nights in an airbnb … with two hand rear kittens in tow.  It wasn’t planned like that.  The airbnb was lovely, and the kittens adorable … but relaxing holiday it wasn’t. 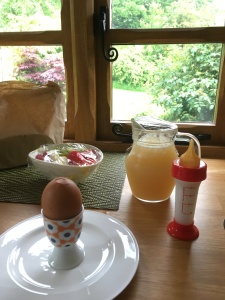 A couple of weeks ago we went off on a real holiday to visit our friends in Singapore. 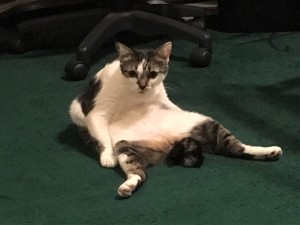 This is one of my hosts.  She’s a real sweetheart and made sure I always had someone I could play tunnels with if I was missing the guys back home.

It’s been touching to see Rufus forging a “smell pal” relationship with our other host.  They share annual olfactory messages via the suitcase.

We’re very fortunate that Jess from 3 Strings Pet Services was able to care for the awkward squad back home.  She cared for them during last year’s holiday and has been patient and resilient enough to continue to care for them when I’ve been working late throughout this year, and brave enough to sign up to a fortnight in full charge of them again.

I was a bit worried about how it would go with the Norton 4.  They’ve grown hugely in confidence with me, but tend to hide if anyone else comes in the room.  Jess had fed and cleaned an apparently deserted room several times prior to the holiday.  I wondered what would happen over the two weeks and if they’d lose the confidence they’d gained.  So I was delighted to get these photos part way through the holiday:

Chicken bribes had paid off and they were learning to trust her too.  Apart from just being relieved that they weren’t scared and miserable … it bodes well for them being able to settle with and trust adoptive families when the time comes.

My other worry was Merlyn.  When she arrived here I assumed that as she was still a kitten she’d adjust easily to being around the residents and have some company and the run of most of the house whilst I was away.  NO!  not having a bar of it.  She ended up on her own in the spare bedroom, which I felt awful about.  However Jess went above and beyond and took her home with her.  This clearly suited Merlyn very well.  She decided that although she didn’t like cats, she rather liked the resident dog.  Reading between the lines … I think she liked him rather more than he liked her.  She also became the sort of kitten who was happy to help with house work and took charge of the dishwasher. 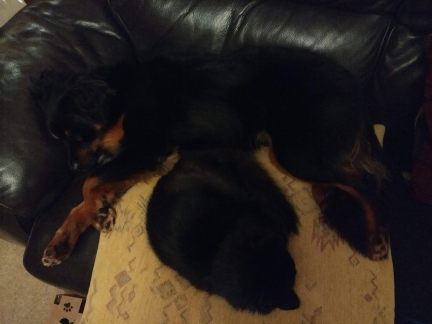 Obviously it was the residents I was going to miss most … though I was less anxious about them in some respects.  They know and love Jess, and she knows their tricks and how they try to manipulate her.   I was relieved that there wasn’t a stand off with Jango (the scourge of cat sitters) this year.   She’s got Flipper’s number for diving up and downstairs to make sure she gets the best deal with food and treats.  Henderson fell just a little more in love.

It was lovely to have a break from them all. Part of the joy of it was anticipating the cuddles when I got home.

It’s taken some time before I’ve been allowed to move around the house without watched and escorted. I love these guys.