bits and bobs and bobbing along

Posted on December 16, 2018 by accidental fosterer

Thankfully there’s been no great drama or headline new stories since the holiday. A lot of rescue is like this … damned hard work … nothing specific … just lots of it.

Everyone was concerned about Stanlie over bonfire night as he steadfastly refuses to come indoors. He clearly loves his foster mum and dad, enjoys fusses with them, and will come into the hallway to eat. He’ll even take the tablets for his sore feet more readily than many cats … but if the door is closed he can’t cope with it. He’s reliably there in the garden though, as I’ve found on all the occasions I’ve popped round to take anything for him. It felt awful him being out on bonfire night … but the options were limited. Thankfully he’s been using his outdoor shelter, packed with straw and in a sheltered spot between the garage and the bins. Even more thankfully, he turned up for breakfast on 6 November as though nothing had happened.

Since Merlyn went home with Jess the cat sitter we had space to take in more cats. The “more cats” turned out to be Bulan & Bintang … named with memories of holiday in the Far East. They’re brother and sister, older kittens who have been living in a garden over the summer and autumn but needed to come indoors now its getting colder. They’re sweet, loving kitties who are clearly very attached to each other. 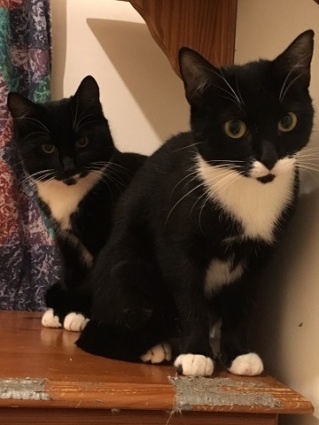 settling in a bit 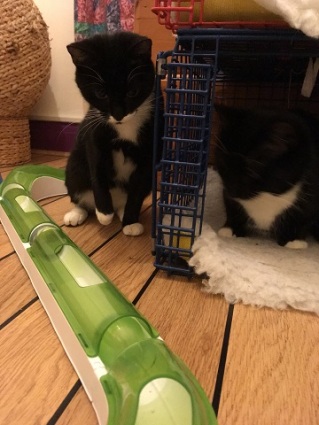 Merlyn meanwhile is living the life in her foster home

The adorable Norton 4 continue to make progress. Bandit now appears for meal times as well as “chicken time”. The biggest excitement has been with Dodger. He’s always been more wary of touch than his sisters. The girls flock to me for strokes, and Dodge follows them … and then isn’t sure what he’s doing. I try to stroke him and true to his name he dodges out the way. However, he only goes just beyond arm’s reach, with his tail held high, and head bumps the nearest furniture, as though he’s just had a cuddle and enjoyed it. Since my holiday he’s been much happier with being stroked and doesn’t jump with every touch. He’s still a bit too dozy to get chicken treats … the girls always get there first.

The next challenge is to get them used to other people. They trust Jess too now, but anyone else and they go into hiding. So we’re commandeering all visitors to help them practice their meet and greet routine in preparation for meeting adopters. Even ‘Uncle’ Alan our IT expert who had come to fix the webcam in the other room was dragged in to sit with them for a while.

Our other strategy is for them to listen to the radio to get used to lots of different voices. I’m hoping it builds their confidence rather than gives them nightmares about Brexit and climate change. I may need to amend their adoption advert to request that potential adopters allow them to tune into “The Archers” if not daily then at least for the omnibus edition on Sunday. 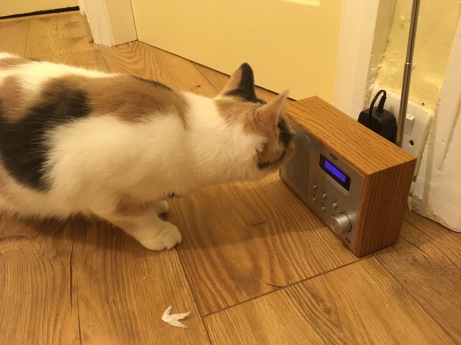 Whatever … their confidence is growing. Fingers and Nancy are destined to be lap cats I’m sure. 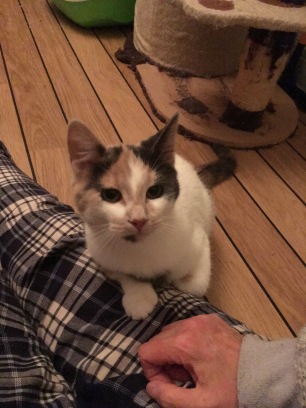 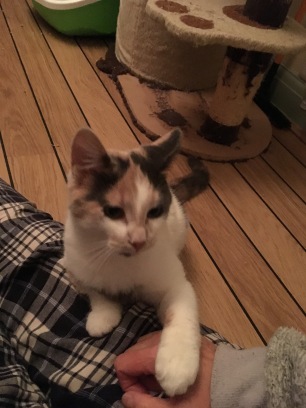 Bandit is a lap cat in waiting … and I just have this feeling with Dodger that given the right patient purrson, he’s going to be a soppy loving tom cat.

2 thoughts on “bits and bobs and bobbing along”