Posted on December 31, 2018 by accidental fosterer

I make no secret of the fact that one of my favourite things about Christmas is hearing from some of our previous guests and seeing photos of them happy and settled in their new homes enjoying Christmas. There’s little as wonderful as seeing the cat who arrived here filthy and scared, full of fleas and eye infections and goodness knows what else … now proudly posing by the Christmas tree, or sprawled on the sofa after too much Xmas dinner, or playing with their new toys as though nothing bad had ever happened in their lives. It makes all the evenings of rushing off to the vet after work, shit shovelling, ear drops etc worth while.

If you’ve been following our facebook page you’ll maybe have seen these photos and a little bit about the cats … there’s more of their stories here:  [Edit … I’ve decided to split this into more than one part as its a long read … just browse … enjoy the photos 😉 ]

Nala got in first to send her Christmas greetings 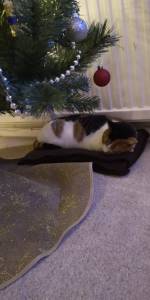 Nala came to us in the summer of 2014 … along with her three tiny kittens. She wasn’t much more than a kitten herself, but on her own and pregnant. She went inside a house and gave birth under a child’s bed. The lady of the house was pregnant herself and let her be whilst the kittens were tiny, but once they started moving around, and she herself had also given birth, she realised they needed to be safe in rescue. 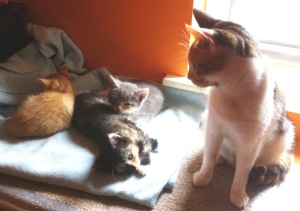 The lovely E Team are also very reliable correspondents. These are four little boys who were born here in September 2015. Gorgeous lads all of them.

Their mummy, like Nala, was a pregnant stray. She arrived here shortly before she gave birth to the boys. 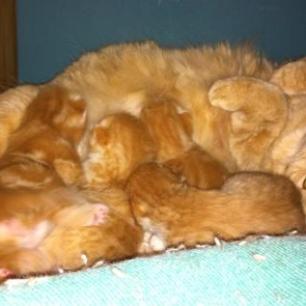 Not all the cats we take into rescue are pregnant … but it does seem that the ones who arrived here pregnant and brought their families up here are good correspondents. Take Betty for example: 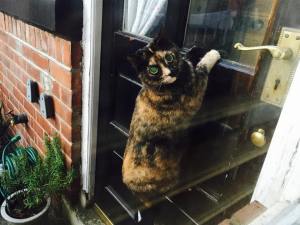 Betty was heavily pregnant and living on the street close to a main road. She was so frantic to get help that she threw herself at our 8 Lives treasurer’s door and hung on until she was noticed. Our treasurer didn’t know she was going to be our treasurer at that point, in fact she’d never heard of 8 Lives. However she searched on facebook, found us and a few hours later Betty was settling into our maternity suite … aka my little front bedroom. She was clearly a first time mum, and didn’t know what to expect. She was so anxious about squashing her kits that she stood up to feed them for the first few days, trying to work how she could lie down safely without hurting anyone. 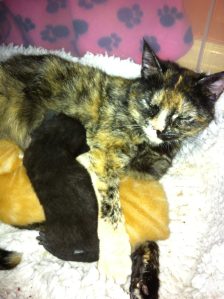 She’d got the hang of it by the time we took this photo. Lots of lovely things about this story. Once the kits were grown and adopted, Betty went back to the lady who had found her, the lady became a friend and our treasurer! And some of Betty’s kits still keep in touch regularly too.   Photos here of Betty now, and two of her lads who will be 4 years old this summer. 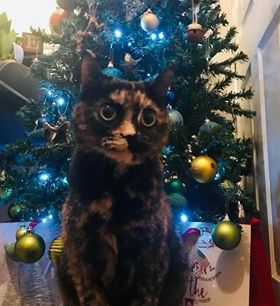 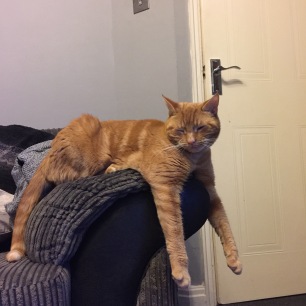 As I said … not all of our cats arrive pregnant. Here’s one who wasn’t but we thought was … Domino. I was at work one day towards the end of 2014 when I got a message asking if we could take a pregnant cat. Long story short we agreed that finder would drop her at our vets and I’d pick her up on the way home from work. It meant that the vet could examine her straight away. She did indeed appear pregnant on arrival … however on examination it turned out she was absolutely full of wind. We’ve no idea what had happened but she deflated slowly and odorously over the next few days. She’s a gorgeous cat, and seems to enjoy posing for the camera x 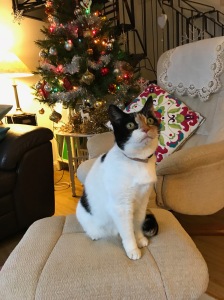 We had a similar sort of situation with Saffia who arrived in 2017.  I went up to a branch of PDSA in West Yorks to collect a cat and two tiny kittens, and was told the cat was already pregnant again.   She did indeed look rather round.  I took what they said at face value, popped them in the car, put their seat belts on and set off.    Something niggled me though.  I’m not great at maths, and doing it whilst negotiating the inner ring road of an unfamiliar city did nothing to help with that.  The kits were just opening their eyes, so must be about 10 days to 2 weeks old.  Cats are pregnant for 9 weeks and start to show about half way through.  So … um … that meant she’d got pregnant again about a fortnight before these two were born.  I know cats are prolific … but !! … we pulled into the next layby … called our own vets and went home via an appointment with them. 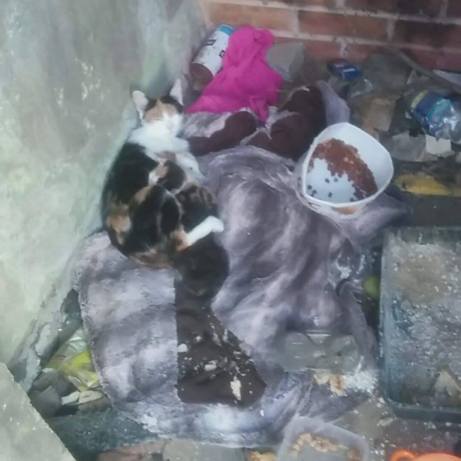 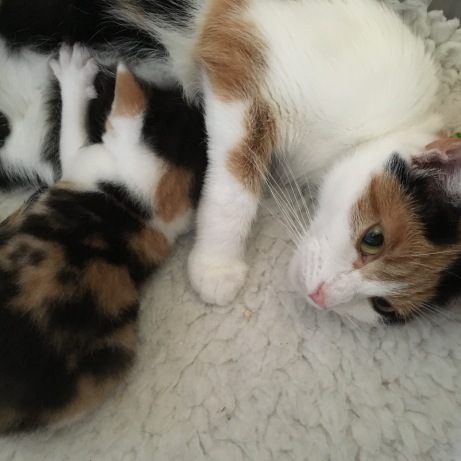 It wasn’t wind this time.  The vet got a very large bowl and gently squeezed her tummy.  We think she’d been anxious to leave her kittens, so she’d not been for a pee for several days.  To my knowledge its not a stunt she’s repeated.   Another lovely little family saved.   Saffia has kept in touch regularly and so have her kits.   The kits have been very excited about their human mum’s advent calendar … mum likes the chocolates but the kittens (not really kittens any longer) love the wrappers and even go into the wastebasket to retrieve them to play with. 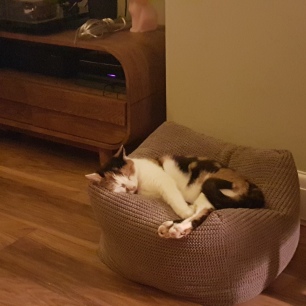 We also heard from Tabbytha and Mowse … who are completely awesome.  Despite being feral/semi feral outdoor cats with no Xmas decorations or internet … they are  some of our best correspondents.  Mowse was a little over excited and out of focus this time. 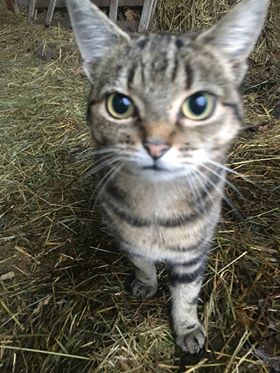 Caring for these ladies back in 2016 was one of the most lovely experiences we’ve had at 8 Lives.   We responded to a plea to help someone on a farm way up in North Yorkshire who had been feeding stray cats, but hadn’t had them neutered as he was unwell, and was now terminally ill so could no longer feed.   I should add that other rescues helped with far more cats than we did … we just played a part.  So I arrived home with two very pregnant farm cats, in a chicken coop or something tied up with twine .. the way they’d been caught by farm hands, but before one of them had bitten quite badly.  You know those days when you wonder what you’ve let yourself in for? 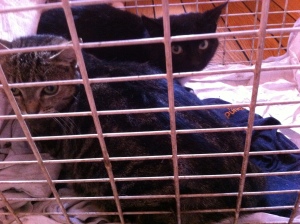 I don’t know who was more scared of who at first, but we kind of rubbed along.  I was anxious about how each of them would be with the other’s kittens.  I’d thought I should perhaps separate them in case they attacked each other’s kittens … but they were obviously very attached to each other … so I put it off.   Birth is always a magical experience … but what happened here just blew me away.  Each helped the other with their births, purring and cleaning newborns as they arrived.  Then shared the feeding and caring of kits between them.  When Simon arrived in rescue, about 5 weeks old, found abandoned in a garden, they welcomed him into the family too.  He’s sticking out like a bit of a sore thumb here … but that was only for a day or so.

getting adopted into the family

Tabbytha & Mowse have found themselves a nice live in job as rodent managers in a stable in North Yorkshire. They didn’t stand in the way of their kittens becoming home cats. We still hear from Simon & Minnie (one of Mowse’s kits) regularly. They’ve recently had a human baby brother so are quite tired:

Hecate is another of our mummies who has sent greetings. She’s enjoying her first Christmas in a new home. Much of what that means for Hecate is that there is food … and no more kittens. Poor Hecate had lived rough for a while by a busy road in Sheffield. She’d had more than one litter of kittens (that hadn’t survived) already when she came to our notice. Thankfully someone alerted us to her plight when she’d just given birth to possibly her third litter of kittens. They were only a few days old when they arrived here this summer.

Hecate was understandably anxious about the intervention … given that her previous babies had perished. I can’t bear to think exactly what happened … and please don’t you imagine or it will give you nightmares too. The little H team grew up … they were harder work to socialise than Tab and Mowse’s kittens were …. but turned into lovely young men. Hecate was wary but found just the purrfect home where she could be loved and learn to trust again. For her the Christmas celebration was about realising just how much she’s changed over the past few months. 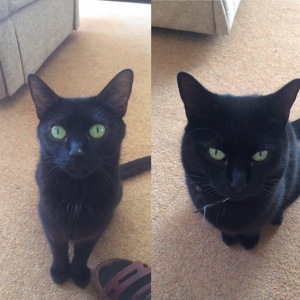 No account of our nativity stories could be complete without sharing Maya’s story.   It’s a sad and happy tail at the same time.  That also started with a phone pinging whilst I was at work .. pregnant cat living in outside toilet … can you help? 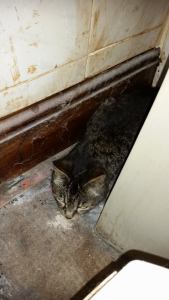 She arrived … pregnant, terrified … and poorly.   Lots of dilemmas about treatment.  She needs care, she won’t let us touch her, so she needs sedation …. but that could affect her unborn kits.  The upshot was that our vets saved her life.  However she came home from the vet, and gave birth to two premature kittens.  One was still alive.

Maya would have nothing to do with little Max … maybe she knew he was beyond hope.  We and our lovely vet nurses pulled out all the stops to give him a chance … but sadly he didn’t make it.  Maya wasn’t easy to care for … still very wary of people .. but slowly making progress.

Jenny our lovely fundraiser took pity on her and invited her home … just on a foster basis (ahem … that was 2015).  She’s gone from strength to strength since then.