Posted on April 20, 2019 by accidental fosterer

After the failed relationship between Dasher & Dexi, she went off and found herself a lovely ‘only cat’ home. 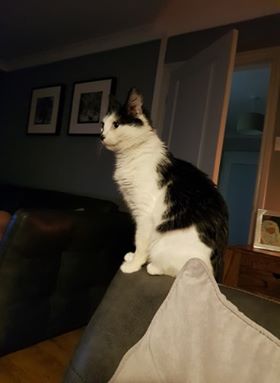 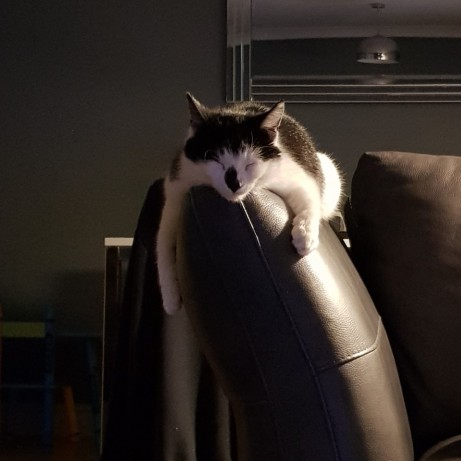 Dasher had been longing to try again to find a pal … but we couldn’t do anything until Dexi had moved out as there was no space for another one … especially when we had Dexi complaining loudly about how many cats there were around here.

He was philosohpical about it and spent his time just chatting with uncle Henderson … and playing in the garden. 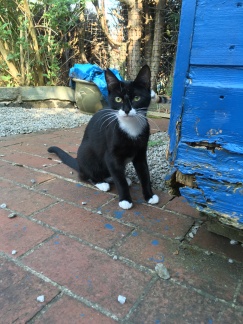 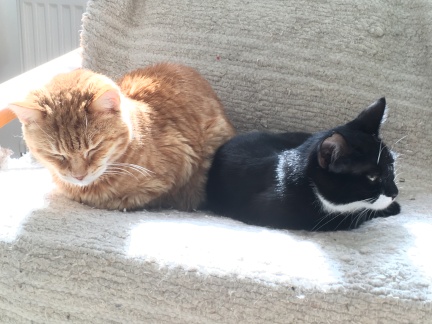 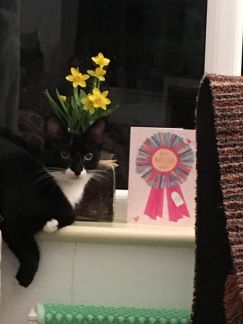 We started putting the word out again that he was looking … and heard that there were 5(!) kits needing somewhere … but they were only about 5 weeks old … so would need to stay with their mum for several more weeks. Five were rather too many to manage … but then Howard landed himself the offer of a foster home, so his bedroom was going to be free. So we agreed we’d take them … hopefully there would be two pairs and another who could be a mate for Dasher. Then we found out the place they were in seemed less safe and we offered to take them earlier so long as mum could come with them. Howard’s room would be free so it would be ok. Then we learned that there were actually 9 kittens and 2 mums … but 3 of the kits had homes lined up and the home they were coming from would only part with one of the mums. So the agreement became that we’d take one mum and six kittens. And we realised that through the long and complicated negotiations we’d started by looking for a pal for Dasher, but ended up agreeing to take a (part) family of 7 which meant there were 3 pairs of kittens, and an adult cat .. but in reality no one for Dasher to pal up with. They needed a place of safety though … so we sucked it up, laughed about it, and got on with making the plans.

The plan was that Howard would go to his foster home on Easter Monday, the room would be available from that evening. Then a couple of things happened. One of the three kits who had a home lined up had his offer withdrawn. Then there was a greater risk of tiny kittens being handed out “free to good home” … except these homes are rarely “good”. An odd number of kittens at last …. but who needed to move pronto if they were to be safe.

So … 7 kittens, plus mum to some of them, arriving today … with no room actually available just yet 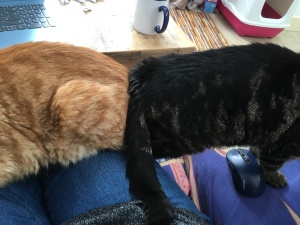 Emergency plan was to move Howard downstairs with the residents for a couple of days until he goes to his foster home. He’s spent some time down here when there was a hope he might be integrated with them.  It went sort of ok .. though there’s a bit of a rivalry for my lap between Henderson & Howard.

Yesterday I frantically cleaned downstairs, so there woudn’t be too much disruption if Howard moved down. Today I guiltily evicted Howard from his bedroom, cleaned my bedroom (next door to Howard’s room) and Howard’s room … ready for kits arriving and not having too much noise and disruption. It’s one of those situations that illustrate the warning to “be careful what you wish for!”. I’d wanted kittens for Dasher & Howard had been desperate to come downstairs. The reality was more stressful than either of us would have expected. Dasher hissed lots at Howard, Rufus started being a little b@gger again and slapping anyone and everyone … just to make his point. 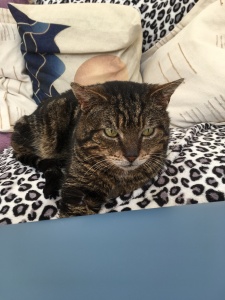 Howard is trying to manage it by stealing my seat on the sofa.   I’m trying to manage it with a complicted algorithm of doors closed and open … and a few beers.  Tomorrow we need to find a way of separting them enough to manage any arguments … but be able to show Dasher off to his best to potential adopters (they also want him to come to his new home with a pal) … without him being able to run off and hide under the sink .. and without any embarassing family arguments in front of visitors.

Praying to the Easter Bunny for assistance 🙂