End of an era

Posted on May 6, 2019 by accidental fosterer

On Easter Monday I took Fingers & Bandit to their furever home … the second pair of the Norton 4 kittens … now young cats.

It marked the end of quite a long chapter in 8 Lives history.  We had the original message about the Norton 4 back in August 2018 – Four kittens around 5 or 6 months old had been living in a garden for some considerable time.  Intially mum had been with them … but she’d moved on .. sadly presumably pregnant again.   Kind people had fed them, but not really interacted with them … and for reasons that made sense, but won’t be disclosed here, had just let them be.

It was a more challenging situation than we’d normally tackle, but it was very close to home, other rescues were full and we could see that if something wasn’t done very soon, the Norton 4 would be the Norton 14!

You can read all the twists and turns in their story if you scroll down the blog a bit … but back to Easter Monday ….

In an almost exact paralell with the rehoming of Nancy & Dodger … Fingers came out the carrier and ran under a chair, Bandit was reluctant to leave the carrier.   In the Nancy & Dodger story, it was a cupboard rather than a chair … but it’s the same difference.   Eventually Bandit made a dash to be with her sister … and that’s where I left them.

Fortunately they are a little more confident than their brother & sister, that is Fingers is more or less as confident as Nancy … though she doesn’t quite express it in the same way, while Bandit is quite a bit less shy than Dodger.  So by the following day they’d put in an appearance at the food bowl next to the chair. 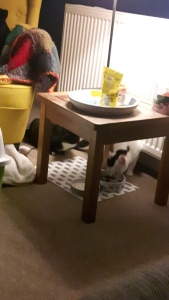 In terms of further exploration it seems Fingers was sent out to check the perimeter of the room whilst Bandit stayed close to the chair watching, cleaning herself and tapping a few toys.

It didn’t take very many days before Fingers was up on the sofa, checking out the cuddles. 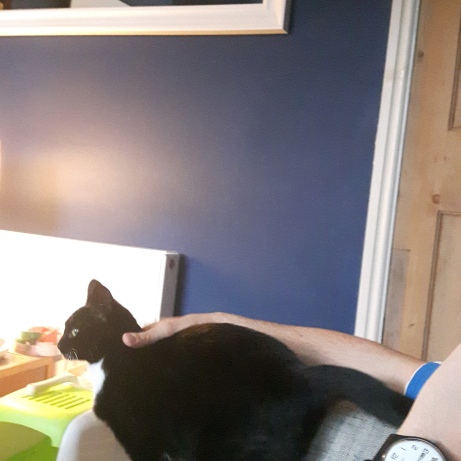 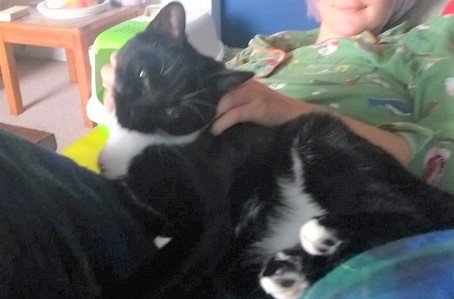 Bandit isn’t quite there with cuddles yet …. but is enjoying sitting on the windowsill with her sister each evening … watching the world go by.

Couldn’t be happier for all 4 of them.  They’ve found two lovely families to give them the best chance possible in life.