Posted on June 8, 2019 by accidental fosterer

You might wonder why we’ve not posted for a while.   There were at least 8 good reasons … and the clue is in our last blog post:

“So … 7 kittens, plus mum to some of them, arriving today … with no room actually available just yet”

They did indeed arrive: 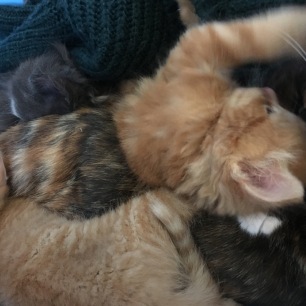 two boxes full of them 🙂

If I felt a little overwhelmed I can only reflect on how poor Ailbhe felt.   You may remember that she and another cat had had 9 kittens between them prior to rescue.  The information was a bit sketchy but we think only three of the nine were Ailbhe’s and that prior to rescue the other mummy had done the bulk of the work.  We don’t actually know which of the kits were hers … so worst case scenario is that she was caring for 7 kittens, only one of whom she gave birth to.   I was anxious about how this might pan out … and had kitten formula and bottles ready … but thankfully didn’t need them.

It took a while to get my head around who was who … but gradually they emerged as individuals, each with their own purrsonality and prefurances. 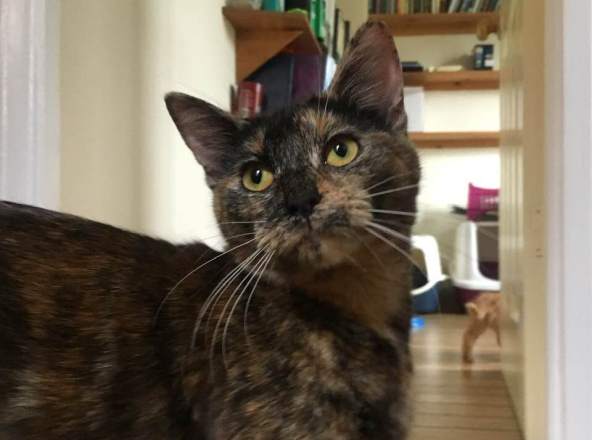 I think I can honestly say that Ailbhe has been the gentlest kindest mummy cat I’ve ever known. We’ve had lots of lovely mummy cats here … but normally by age 6 weeks the joy of parenthood is wearing a bit thin and they’re swearing at the kits and slapping them about a bit. However, I’ve never seen her have a cross word with any of them.

It’s been a whirlwind … a delightful, stressful whirlwind …  but Aric & Archie, and then Ash & Arran went off to their new homes.  Last night after work (mine not theirs!) Ailbhe & Alix went to their new home.  Alice & Arnold moved downstairs for remedial catting lessons … supervised by Uncle Henderson.

There was a brief pause and celebration last night … then up at six this morning to clean … and prepare for new arrivals. 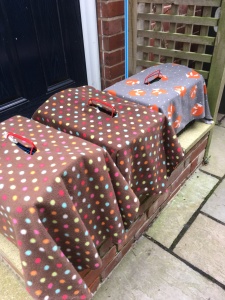