Posted on February 8, 2020 by accidental fosterer

We’ve reached a stage where all the purrmanent residents at 8 Lives, apart from the infamous Flipper, are teenagers. I mean teenagers in human years …. so in feline terms senior kitizens – as opposed to defiant adolescent /teenage stage felines. 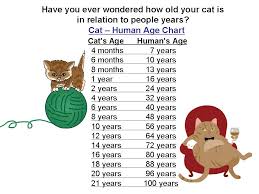 Oldies have a charm that needs to be experienced to be appreciated.   They’re slower, quieter, less destructive, more and more gorgeous and snuggly every day that comes.   The challenge is that older age (as with humans) often brings health issues and challenges.  This is the time you might start to be glad that you took out good pet insurance whilst they were younger … though sadly some of ours were too old or had too many pre-existing conditions when they arrived in rescue to make insurance a viable option. 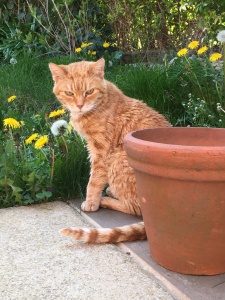 We don’t know for sure how old any of them are as we don’t have full histories ….. actually we don’t even have sketchy histories.   Apart from Jango they were found as strays.   We know that Amber is Honey’s kitten so is a little younger than Honey … though probably not much.  Jango came from the dog pound but sadly we have no history of how he came to be there or his life before that.

So our official guesstimates are that Amber is 13, Honey & Jango 14 and Henderson 17.

The girls, Honey & Amber are kind of doing ok.   Honey went for her health check yesterday and we were concerned that she’s lost a bit of weight, but mostly things checked out fine so we’re just keeping an eye on her weight and see how things go.  Amber is trickier to care for.  Whilst her mum had clearly been a pet cat before becoming a stray, Amber was born outdoors, and didn’t have enough socialising early enough for her to be confident with humans.  So when Honey came into rescue she quickly settled back into being a happy snuggle puss, whilst Amber has remained wary despite the number of years she’s lived here.  Don’t get me wrong, Amber is setttled and happy, she purrs and plays and relaxes …. until you approach her.  Then she’s scared.  She’ll allow some strokes but is very stressed by any other intervention …  so any trip to the vet is a major trauma.  She’s a bit snuffly from time to time … we assume she had cat flu before coming to us.  We keep an eye on it … mix in some meds with her food to help with that sometimes … but mostly try to avoid stressing her by doing anything else.

The boys have had more health issues.   Looking back on it, Jango was less active than you might expect even when he arrived here nine years ago, but at the time we put it down to him being a lazy ginger tom cat … and maybe he was.  He’s also always bunny hopped down the stairs … again we put it down to not being used to stairs or just one of those quirks of his (he has many!).  As time went on though he became more apparently stiff in his joints.  The lazy spilling out of his bed, and flopping on his back  came to an end.

We worked our way through joint supplements … which helped a bit.  Then moved to daily metacam …. and more recently have needed to add other drugs to manage his pain.  He can just about still manage the stairs under his own steam … but prefers to sit at the top or the bottom and wait for a human stair lift to scoop him up and carry him … or howl to request assistance.

Our bed is one of his favourite places to sleep but we realised he was beyond being able to jump … or even scramble up.   So we rigged up a stairway using a low footstool, which led onto a bedside cabinet which was lower than the bed, and then a final step to the bed.  That also started to get tricky for him …. so we invested in a ramp.

That’s proved to be a great success. The other cats like it too and it serves well as a scratch post.

The arthritis sadly isn’t his only problem. He howls very loudly … pretty often. Sometimes it’s clear what the problem is …. he’s waiting at the bottom of the stairs and getting impatient for someone to carry him up. Other times, and often in the middle of the night he’ll howl and there is no apparent reason. The first time I heard this sound I flew out of bed thinking something dreadful had happened … he’d trapped his hand in something, fallen, hurt himself on something. But no … he was standing on the landing …. just howling.

We’re fairly confident he’s not howling in pain .. for one thing he’s on lots of pain meds and for another it’s just not what cats do … they hide their pain rather than shout about it. However we’re pretty certain he’s very deaf, and that may explain why he’s so loud. Deaf cats just like their human counterparts tend to shout. I know with cats it’s tricky to be sure about the quality of their hearing as they’re masters of selective deafness …. but he regularly sleeps while I hoover round him. Another reason for the howling could be dementia. Sadly it affects cats as it does humans. Having watched my father suffer with it, I’m reluctant to accept that it’s happening to Jango too. I do think some of the howling is deaf shouting and impatience. However after experiencing several nights of having to get out of bed 8+ times to find him standing howling on the landing for no apparent reason I think we have to accept that there’s an element of dementia. Thankfully when he’s picked up and snuggled into bed he settles for a while and purrs very happily.

Despite being unsure of their ages we’re pretty sure Henderson is the eldest.  He was guessed to be 14 when he arrived here 3 years ago.  He’s been collecting ailments ever since.   All the usual elderly cat things – hyperthyroid, then chronic kidney disease and most recently high blood pressure.  His mobility isn’t what it was though he’s thankfully not as stiff in his joints as Jango.  He can’t jump too well but what he’s lost in agility he more than makes up for with strategy.   These beds on the table are popular with the residents as the table is against the radiator so the back of the beds are heated.  Hendo can’t jump but has worked out a route: onto the spokes of the chair on the right of the table, onto the spokes of the table, then to the seat of the chair on the left of the table, and from there onto the table and into a cosy igloo.

We decided to invest in a heat pad for them all.  Jango has aching joints that would benefit from some warmth, Hendo is a skinny old chap who needs some extra insulation.   We weren’t sure if any of them would use it.

Henderson looked a bit uncertain when I first put him on it but after a few seconds it dawned on him that there was lovely warmth coming up through his feet.  He’s scarcely left it since then.

not sure at first 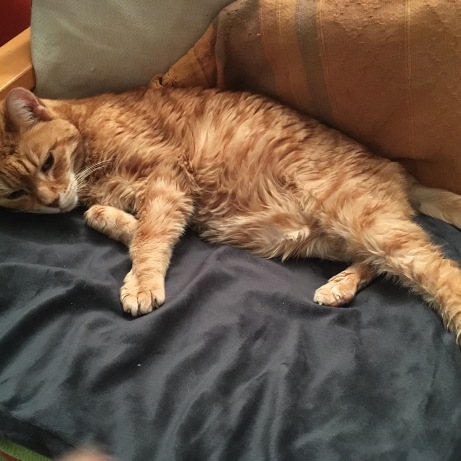 Jango also had a go

Flipper has also been a major user of it.  She’s not old and thankfully not poorly either … but she’s very often complaining about being cold. 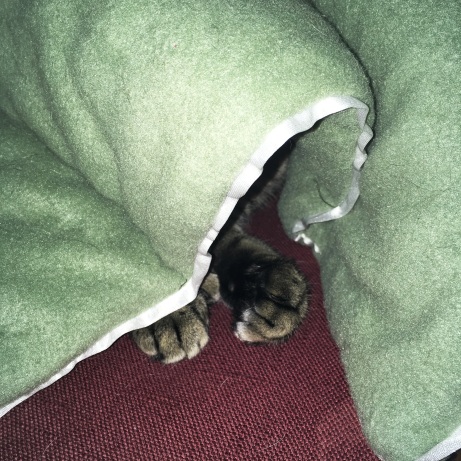 She absolutely loves it 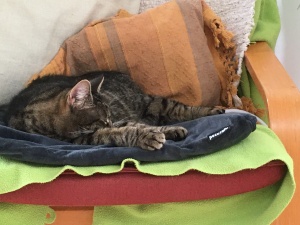 Really pleased to have found some things that make their lives easier and more comfortable.

Big thanks to Howard’s adoptive parents for prompting us to get them.

Our oldies are so precious.