Things are getting a little heated around here

Posted on February 15, 2020 by accidental fosterer

We mentioned in our previous blog about having bought a heat pad for the cats, mainly to help ease some aching old bones for our very senior cats.  It’s proved a huge …. and fascinating …. success.   It’s possible that if you’re a follower of our facebook page you’re already fed up of posts about it … apologies for that 😉

Henderson (a bit underweight and definitely the most senior cat in the household) and Flipper (the youngest of our purrmanent residents … but the first to complain about being cold) are the main users of it. 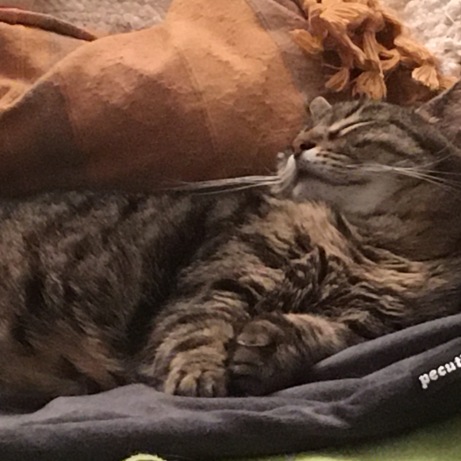 It’s made me review my sense of importance to them.   Since the purchase I’ve been very aware of having to share Hendo’s affections with his blossoming relaitonship with the heat pad.  It hurts sometimes to find that the pad his chosen above me …though slightly reassured that although he purrs like crazy when he’s on my organically heated lap, there are no purrs for the electric one.  I’ve also been conscious of being chosen for a cuddle because the heat pad is taken by someone else 😦   It puts me in my place for sure.

However the really interesting thing for me has been watching the interactions of how they share it.  I’m so proud of my gorgeous cats and their ability to get along together and work things out.  I’ve watched various cats visiting and revisiting the chair the heat pad is in and looking to see if it’s free … and then walking away if it’s already occupied. 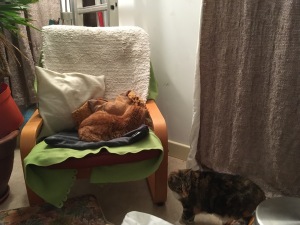 Amber disappointed on this occasion

There have been no fights … just subtle negotiations.  Henderson’s Achilles heel is that as a renal cat he needs to drink frequently.  I’ve watched Flipper hanging around either on the sofa or the windowsill, watching for the moment his thirst gets the better of him.  Then she’s in!

The really cure moments are the times they find a way to share.  I watched this careful shuffling with Flipper & Henderson over a period of about 15 minutes. 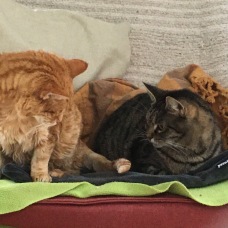 Although they get along ok I’ve not witnessed these two sitting so close to each other before.  I love the last photo where they’re pretty much holding hands.

The other sweet interaction was with Dasher and Hendo.  Dasher used to snuggle with Henderson when he was little but hasn’t done for a while.   I think he thought he could snuggle again … but then realised he was too big to fit.  Dasher had been playing out in the cold though … so at least wanted to warm his hands and feet. 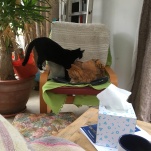 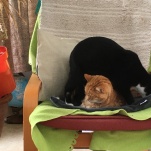 In case you’re wondering … both Amber and Dasher have had their turn. 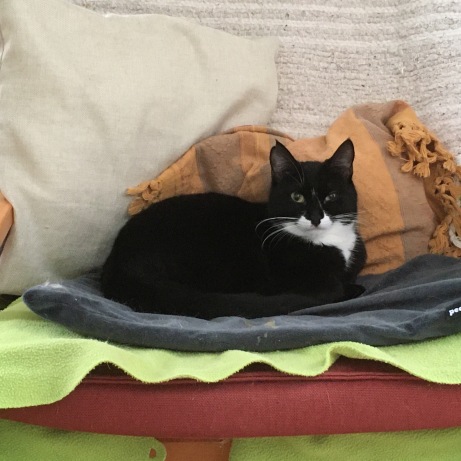 Albeit with Hendo waiting in the wings

We’ve given in to pressure this weekend and ordered a second one.