Posted on November 7, 2013 by accidental fosterer

Just been trying to remember the last time we were without kittens around the house.   It must have been before Flipper was born last May.   We’re all being very grown up, and the sound of the wildebeest stampede overhead has finally halted.

Our new rescue cats, Jak and Jenni are a very different challenge.  This is a mum and her son, who lived with a very elderly man until he suddenly became to0 unwell to care for them, and they were temporarily admitted to another rescue as an emergency.  Poor things had been used to a quiet life and suddenly they were sharing a cat pen with lots of other cats, being cared for by humans they’d never met.   They were both absolutely terrified; growling, hissing and lashing out.

Getting into carriers again and coming here was pretty horrid for them too.  They got out the carriers in their new bedroom and ran to hide. 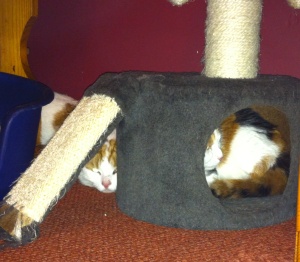 Jenni stayed in the little hidey hole under the scratch post, Jak shuffled behind the blue cat bed and wedged himself there.   Each time they were visited in the first 24 hours that’s where they were.  We know that they’ve popped out briefly because some of the food has disappeared, and the dreamies have gone.

They’ve hissed and growled when anyone has gone into their room.   However with the help of a tin of sardines there’s been a little progress this evening.  Jen was furious when I offered her a little taster on a spoon (one with a long handle – i’m no hero!) and growled at the intrusion.   Jak’s tummy got the better of him though and he decided to risk it.  Jenni heard him licking his lips and wiping his whiskers and couldn’t resist any longer.   So they’ve both taken a little food from me, and both moved their heads slightly out of hiding.