Posted on December 22, 2013 by accidental fosterer

This Xmas’ heart throb arrived yesterday.   Because he came at Christmas Sooty wanted to call him Cheeses, Flipper wanted him to be Rudolph, I’d vaguely entertained the idea of Santa or Claus …. but when it came to it, we called him Leo, the name the lovely lady who brought him into rescue would have given him had she not been afraid to name him in case she couldn’t part with him.   She’s a fantastic person who helps lots of strays in Birmingham, and spotted Leo living amongst them when he was only quite a small kitten.  She took him in and cared for him but hasn’t had any luck re homing him. 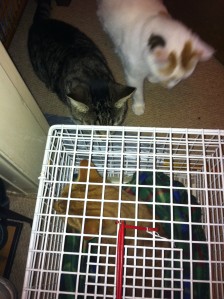 We met half way at a service station, he had a narrow escape from being called Donny as a result of that.   He slept most of the way home.   In fact he was so quiet that by the time we got to Chesterfield I was wondering which vets might be open at that time on a Saturday. 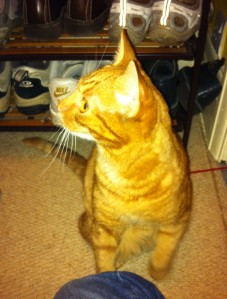 I needn’t have worried, he hopped out of the carrier once we were home, and after a brief interval of being overwhelmed by the other cats and hiding under the shoe rack, he bounced out and was fine.   I wasn’t going to bother with putting the tree up this year, but with it being his first Christmas and all, I trudged up to the loft to get it.   Leo took on the challenge of helping to assemble it very calmly.   Flipper feigned indifference, “been there, trashed that”, and sat on the scratch post supervising him.

Today he looks like he’s always lived here.   Jango is clearly his super hero and role model.  You won’t go far wrong having Jang as your role model …. indeed you won’t go very far at all!   He’s happily finding all the best places to sprawl himself out.

leo with his hero jango

Leo is going to be just such a catch for some lucky person / family.   He’s about 6 months old now, used to living with cats and dogs.  His keyboard skills aren’t brilliant … though for an excited youngster they’re not bad.  We’re also concerned he may have a slight alcohol problem ….. but hopeful that in the right home he’ll be able to work through that.