Posted on December 28, 2013 by accidental fosterer

We hinted as this in our previous post but couldn’t quite believe our luck.  Jak & Jenny have a new home!!  I simply couldn’t imagine who might take these two on and worried for ages about whether to think about separating them and looking for domestic home for Jen and a position of rodent control executive in a stables or similar for Jak.   Then my friend from Friends of Ferals passed on an enquiry to me.   No bells and whistles, just a simple enquiry about adopting an adult cat, maybe two.   I wrote back about Jenny, hoping perhaps this could be a home for her at least, and mentioned Jak too, praying I wasn’t pushing my luck and would put the lady off all together.  Then tried to not think about it any more … it doesn’t do to get too hopeful.  To my amazements he wrote back saying she’d discussed it with her partner and they were potentially interested in both of them.

Still not daring to hope for much, I went off to home check and it was great.  Nice home, lovely couple who were interested in offering a home to cats who were less than easy to re home.  Then the tricky bit of them coming over to meet the cats.  Luckily they decided to come straight away, so there wasn’t a lot of time to worry about it.  I knew they wouldn’t see them at their best and that they’d take a step back when two new people walked in.  But just how far would they go back and would this lovely couple believe what I said about the progress they’d made?  It seriously did not help that my neighbour managed to synchronise his timing for putting up a shelf in the adjoining bedroom with the time they came to meet them.   Nevertheless, once the drilling had stopped, things went reasonably well.  Both of them hissed a bit but didn’t completely hide or do the wall of death round their room. 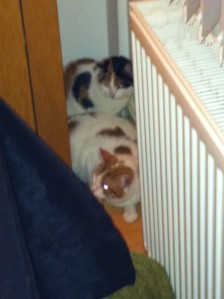 Yesterday I managed to bundle them into carriers, hugely helped by my friend Wizz who was on call in case I couldn’t manage it.   Fears of them going back to square one with another move were unfounded.  Although they were clearly anxious, and hid round the corner of the sideboard, they were curious, watching, and ears up rather than flattened against their heads.    The more I chatted with their new mum the more confident I felt that these two were in with a good chance of making a go of it.  Before I left a friend had arrived to have a look at them, and to bring an offering of roast turkey.  This morning I had a message to say they’d eaten … turkey plus cat food, and had used their litter tray.  Given that it took over 24 hours for them to do either when arriving at my house, this was very hopeful.

I really filled up when I had another update this evening:

“Another quick update – Jenny ate some treats out of my hand and let me stroke her ears and is now lying in one of the cat beds. Jak has taken up residence on the mat next to the radiator and is gently poaching as we speak! ”

Confirmation that they’d held on to the progress they’d made whilst with me.  Jenny trusting someone to stroke her, and my big brave Jak, not planked under the sideboard with his ears flat against his head, but gently toasting himself under the radiator.   Lovely lovely gentle, kind, patient humans letting them be themselves and giving  them space to find their own level for relating to people.