A couple of surprises and some good news

Posted on October 25, 2014 by accidental fosterer

Let’s start at the beginning of last week. We’d had lots of requests to take cats in, and sadly had had to say no to them. Just too full with all the little Fs and Ts, and of course Bosca. Monday afternoon I had a serious talk with myself, after yet another request to take in a young man who was desperate to get in out of the cold. The only thing that was going to make us let anyone else in was if it was a pregnant cat, and even then. only if she was local (trying to remember we were set up for S8 cats) or had some other connection to us. Twenty minutes later there was a phone call from our vets – someone had found a pregnant cat in Sheffield city centre, RSPCA and Cat Protection had said “no” … could we help? Gulp …. she fitted both the connection criteria (our vets are wonderful and we’d do anything to help) ….. and she was pregnant. So we set up our bedroom as a maternity unit, moved our bedding downstairs and prepared to sleep on the floor until the as yet unborn kits had had their vaccinations and were ready to go to their new homes.

Arrived at the vets to collect puss …. to the news that once she’d arrived with them the ‘pregnancy’ had been diagnosed as ‘wind’ … with a prognosis (as she gently deflated in the consulting room) of a severe bout of diarrhea later in the day. Um …. we’d only agreed to take her because she was supposedly pregnant, but somehow just couldn’t say “no” to the sad little face poking out the top of her cardboard box. It felt a little like she’d stuffed a cushion up her jumper to get to the top of the housing queue .. but seriously …. would you just put her back out on the street?

We’re not being mean – but giving up our bedroom to a pregnant lady is one thing …. giving it up to a cat forecast to have a serious gut explosion in the next 24 hours is something else. The maternity suite was collapsed and temporary quarters established in the conservatory. ‘Windy’ settled in gratefully …. ate plain fish for a few days and slowly decompressed. She’s a sweet purry cat, who doesn’t seem to like the residents very much when they’ve seen each other. Then again, the residents are a funny lot and a bit of an acquired taste. We’ve advertised her as “found” and searched the “lost” adverts … but nothing has come up. She can’t stay here much longer as “lost” … so later next week will start the process of health checks, vaccinations, contraception and chipping.

The good news last weekend is that Bosca, who has been with us since May, went to her new home. We didn’t try too hard with rehoming her over the summer because everyone was happy being out in the garden in the sunshine. However once the lovely weather ended and the nights started to draw in, the cracks in the relationship between Bosca and the residents started to appear. We had a few enquiries about her, but then the perfect home came up for her, and Bossy is now settling down to enjoy the rest of her life. 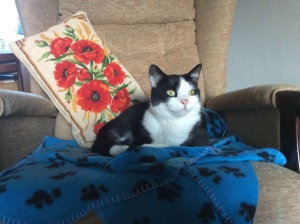 And here”s our second surprise. A lovely young woman came this weekend to meet Fuzzie – from the adverts he looked like he was just the right young man to fit into her family. We had little concern – he’s a confident young man who could easily charm almost any visitor into adopting him. When she arrived Fuzzie was snuggled in a bed with Floyd. All seemed well. We started talking to them and playing, expecting Fuzz to run to join in, and Floyd to run away. The strangest thing happened. Fuzzie went and hid in a cardboard box, whilst Floyd (the timid lad whom we have to chase around the room to be able to stroke) was clearly transfixed. He ran up to her, licking her arm, enjoying her strokes, and even let her rub the Floydy tum. [We’ve never been allowed to touch the Floydy tum!] Freddie and Fern played around as normal but Fuzz took himself out of the picture. 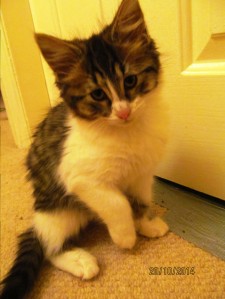 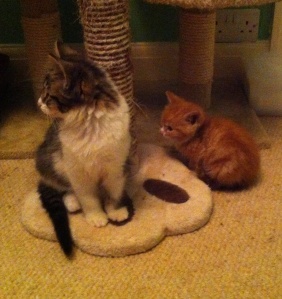 Floyd excelled himself in charming her, and has won himself a home. He’s chuffed to bits and not only wants to announce it .. he wants to shout it from the rooftops

Discussions afterwards with them suggested that Fuzz had also really liked the lady, but he was aware that his timid cousin would find it hard to find someone he felt comfortable with. So when Floyd said that he liked her, Fuzzie tactfully hid himself away so that Floyd had a chance to woo her. Good boy Fuzzie, such a sweet thing to do. And congratulations to Floyd!