Not an easy week

Posted on October 17, 2015 by accidental fosterer

It’s been a mega stressful week this week. Elsa started her time here as a rather timid and hissy cat a couple of months ago, but settled and was a lovely attentive mum to her four little boys. 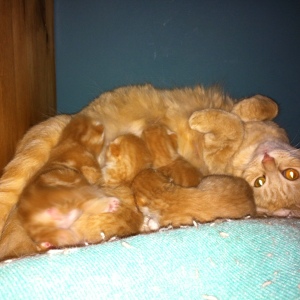 She’s been a really good mum, but in the last week or so it’s all got a bit much for her. Between caring for her kits, looking to defend them from the other cats she can smell (though wouldn’t actually be allowed anywhere near her and her little ones) in the vicinity, and hormones ebbing and flowing (she’s mostly likely coming into season again already) it’s just overwhelming, and she’s started attacking her little ones. There are always going to be some scraps and frayed tempers at this stage … sharp toothed kittens, x4, still wanting to breastfeed … most mums would lash out, and being in rescue cooped up in one room isn’t ideal … though it is better than trying to protect kittens living out in the open, unfed and at risk from foxes etc. 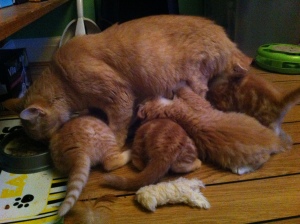 Unfortunately its gone beyond the usual slap around the head for nipping her, playing with her tail, or not keeping still whilst she’s washing them. Elsa has been really kicking her kits, and hard … sometimes quite unprovoked … and pursuing them when they run away from her. After discussion with our vets we’ve concluded that she needs to be separated from them … and just given some supervised contact time.

On one level that’s seems fine … the kittens are safe, Elsa has some space.  On another level, the question as to be asked “what space?”, and “how will she and the kittens cope?”

a) The space she’s got is the room we’d been using to keep Shadow and/or the I Team separate from our adult residents (and me) overnight so we could have a little peace to sleep.   So now these three older kittens are free-range  day and night, chasing each other, diving on the bed, and generally bothering me and the residents.  No sleep and that’s affecting my day job 😦

b) Elsa isn’t coping well with it.  Although she clearly didn’t want to be with her kits, being away from them, but within smell and sound range, is not good either.  She howls 80% of the night and rips at her bedroom door and the laminate.

c) The kittens are kind of coping.  They were quite subdued whilst she was sharing a room with them, but have started to come out of themselves a little now.  It’s been a steep learning curve with the weaning though