we interrupt our holiday photos to bring you the latest news

Posted on November 28, 2015 by accidental fosterer

We had a lovely quiet first week (not quite a week) home from holiday.  Well … “quiet” if you ignore the harsh reality of return to work, and the normal chaos of our resident cats and the little E Team.   There had been a few messages whilst we were away about cats looking for rescue places, but things seemed to have settled down.   Then last Friday we had a message about 9 kittens needing to come into rescue.  They’d been mentioned whilst I was away, but seemed to be sorted out, and now they weren’t and it was “urgent”.  So between appointments at work on Friday I was messaging about them and arranged to collect early Friday evening.  Rushed to supermarket after work to stock up on kitten food,  got the room ready for them.  Minutes before I  set off to collect them and I get a message to say they’d been given away.  One person had taken 4 and the other taken 5.   It’s not easy to think that they’ll be safe and neutered and cared for … but nothing else really that we could do. 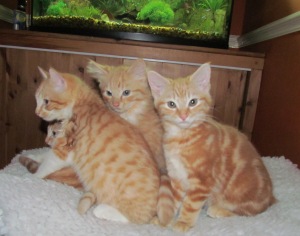 So we had a room ready for kittens who weren’t going to arrive, and moved on to the next priority scenario:  Snowy had messaged us whilst we were away to ask for a rescue space.  His elderly human had sadly had a stroke and gone into a care home, and he was all at sixes and sevens not knowing quite what to do with himself.  He was being fed and could access his home still so he hadn’t been top priority, but now that the kittens who were outside didn’t need the space, he was offered it.  He got back to us saying that although he’d been looking for help for a few weeks, he now had someone who might offer him a furever home … so thanks … but he probably no longer needed us.

Snowy before coming into rescue

So then when another lady messaged to say she’d been living in a garden in S8 for quite a while, needed to get in out of the cold, and was off to the vets on Monday to check if she was chipped and had a human out there (though she doubted it) we said she could come and stay with us after the vets if she had nowhere to go.

And THEN Snowy messaged us, pretty gutted, to say that his dreams had crashed, his potential adopter didn’t want him after all, and could he please come in.  We had to say “no” because we’d offered it to the lady who was going to the vet on Monday.

But THEN, Monday came and went and the S8 lady didn’t get back to us.  If she had we’d have picked her up from the vet on our way home from work and she’d be here and safe.  Because she didn’t, we went back to Snowy and re-offered him the space.   I hate this kind of chaos… but so often people contact rescues wanting “urgent” rescue space, then resolve the problem in whatever way, and then never bother to reply to rescues offering help.  With so many cats needing care we just have to move on to the next one.

We went out to pick Snowy up on Tuesday evening.   He was obviously anxious, and had let himself go a bit since his human had been ill.  He got out of his carrier, cleared off and hid behind the chest of drawers in his room.

Then later (LATE) that evening we had a distressed call from a friend about a mum and her kittens who had been living rough.  A complicated discussion had occurred on facebook earlier, and a botched rescue plan which had left mum and kits trapped in a small carrier for several hours.   We were able to arrange to get  the little family safe overnight and I went up to collect them the following evening (Wednesday).   They arrived quite traumatised and terrified.  Sadly there is a fourth kitten who is still at large out there as he couldn’t be caught … so we’re still waiting for him… and will obviously need to slot him in if (please god) he is found.

THEN the S8 lady who had been living in the garden got in touch with an update of her vet trip, revised to Friday this week. Heartbreakingly I had to say “no” to her and suggest other options.

THEN on Thursday we had a message about mum and 6 kittens living rough in another garden.  The finders planned to adopt the mum but needed rescue for the kittens.  My immediate response was to think “no”!  But as rain lashed against the window of my office and I turned the heating up … and thought of tiny ones living outdoors.  Another 6 would only take us up to the 9 I was expecting last Friday, and maybe more confident kits would help the terrified ones.  So we offered a space but then the finders didn’t seem to be proactive in responding / arranging to get them here.  I set a 10am deadline for Saturday after which we would cancel their rescue place. And since we’d been thinking that we could fit another 6 kittens in, maybe we could use that space to bring in the S8 lady who was living outdoors.   The deadline passed, various other “urgent rescue space” messages flashed through (two 10 year old cats about to be put to sleep because “owner” had had a baby; 3 young cats (one of them disabled) …  being given their marching orders because “owner” having another baby all considered … these are just the local ones)  but we decided the best option would be to offer to the S8 lady.  I was on the edge of writing to her when the 6 kittens messaged to say they were now 5 and could they come tomorrow?

It’s still touch and go whether the “6 now 5” kittens arrive, but the S8 lady has revised her vet trip while Wednesday.  I’m writing this not to criticise anyone … we all have pressures and limitations and lives outside of cats (um … well most people do) …. but just to give you an idea of what sometimes goes on behind the scenes with rescue.  I try to do the best I can with the ones who get here, and not think too much about the ones who don’t.  If I did I’d go completely crazy 😦