Stop all the clocks …

Posted on March 26, 2016 by accidental fosterer

Let the mourners come …. Pack up the moon and dismantle the sun … Our beautiful precious Sooty Ryan has gone.

He arrived here one inauspicious Thursday evening some five years ago.  Another stray cat needing to get in from the cold and the snow.  He’d persuaded someone to let him sit in their house until they found a rescue space for him, and I went to collect him at 6pm … I still have the email arranging it.

I remember being teased at for producing a “Found” poster which described him as “handsome”.    Once I stopped and thought about it objectively …. he probably wasn’t that handsome …. he had a single dracula fang canine tooth which was loose, and a large tick on his back.

Anyway, he moved into my back bedroom and made himself at home.

There was no response to the posters.  A trip to the vet revealed no microchip, relieved him of his tick, and diagnosed him with hyperthyroid and some arthritis.   We also realised that he was deaf.   Not a great prospect for rehoming.  An elderly black deaf cat with health issues.   Something about him though …… and he got on well with our Jango

Before you could say dental work and medication he was ours. 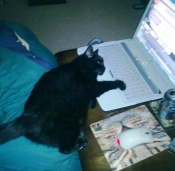 He kind of started as he meant to go on by stressing me out disappearing the day before I went on holiday to India.   A lifetime ambition to see the Taj Mahal blighted by waiting on a text from home to say that he’d turned up.   He followed this up a few years later by going missing when I returned from another holiday.   This time he’d found himself a human girl friend in the next street.   The affair continued for months, collecting him on my way home from work, either in the car or on foot.  Always purring the whole way home, but invariably going back round there again when I went to work. 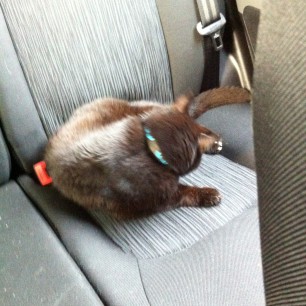 Sadly these escapades had to be curtailed when he began lying down for a nap in the middle of the road on his way home.  Thankfully it was a friend who was driving down the road, carefully, and spotted him.   He continued to go out a little but only whilst supervised and wearing his smart butterfly jacket. 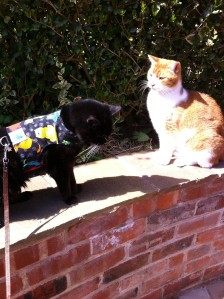 Recently Sooty’s health has deteriorated.   He’s always been keen to take his thyroid tablets and managed that quite well, but then his kidneys started to fail, he lost weight, and lost more weight.   Despite hand feeding him since Christmas and starting on meds for his kidneys things continued to go downhill.  He was admitted at the vets on Monday for a last attempt to hydrate him using a drip.  Sadly he gave up the fight on  Tuesday morning.   My lovely friend Jenny almost carried me to the vets to collect him, and we brought him home to explain to the other residents what had happened.  Little Flipper was devastated, she’s always been closest to Sooty, even though her head bonks with him recently have nearly knocked him off his feet.

Feeling quite stunned at the moment.   However much a bereavement is expected I think it still comes as a shock.   In time I hope I’ll smile at so many memories of him.  He used to like to show foster kittens a thing or two about hunting toys

and he was a real foodie.  Maybe, sadly linked to being a stray and having to scavenge, he loved human food.   For a deaf cat, his ability to sense when the fridge door was opening was second to none.  He loved cheese particularly, all types of cheese, and cake and tomato soup …. there was nothing that didn’t deserve just a little Soot Taste. 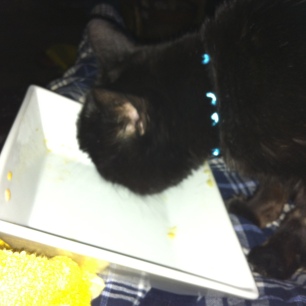 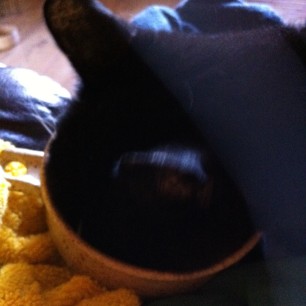 For now part of my brain resolutely tries to count to 5 when I’m checking on my residents, prompts me reliably but pointlessly and heartbreakingly to remember his medication, and cruelly taunts me with glimpses of him out of the corner of my eye.

My noon, my midnight, my talk, my song;
I thought that love would last for ever: I was wrong.

*Thanks to WH Auden

One thought on “Stop all the clocks …”