Posted on February 25, 2017 by accidental fosterer

Our building work started on Wednesday so the plan last weekend and early this week was to take things steady, gradually moving furniture, acclimatising the cats to a new routine and bracing ourselves for the onslaught.   We were proud of having finally managed to say no to new arrivals …. leaving us with just 9 cats.

Daisy Mae managed to get herself a foster space with Xin & Xavier’s family, packed her bags and was evacuated on Saturday.   Jojo had bagged herself a nice new home and I took her there on Sunday.

So that left us with just 7 cats ….  the fewest we’ve had in I can’t remember how long.  Not only the fewest . … but 7 cats who all get along reasonably well, so none of them need to be in a separate room.  That got us to thinking …. what better time to attempt to decorate the ‘cat’ rooms.   Hmmm … you may say ….. a better time might be a time when there aren’t builders demolishing the back of the house, a time when everything else isn’t in chaos.  However, when the building is finished we’ll be coming into kitten season and need to have rescue spaces to offer.   So we completely emptied one of the rooms and piled everything in the other, cleaned and sanded and then  went to B&Q (other DIY stores are available)  to buy paint  ……

To understand this we need to back track to last Thursday.  In fact to really understand it we need to go further back .. and will do in another post.   Anyway ….. Thursday teatime I’m in the kitchen and Flipper shouts that there’s someone at the cat flap.  I go to see and its a sad little black and white face that I’ve not seen for months.  It’s Tippy …. a stray we’ve known and fed whenever he’s visited …. though his visits have been a bit random

I rushed out to feed him and he quickly ploughed through a couple of pouches and a man sized helping of chicken. He’s never looked well but now he looked really poorly. He’d lost weight and his breathing sounded awful. I was desperate to get hold of him, get him indoors and safe, get him to the vets … but as ever …. when I went nearer to him he backed off. I didn’t want to try to grab him, fail and end up just depriving him of a much needed meal / scare him off from coming here again.

I messaged another woman who feeds him to say how worried I was about him … but she said she’d not seen him for weeks. I kept looking for him over the next few days but no sign ….. until the phone pinged on Sunday.

He’d gone to see the other feeder and was even more poorly …… to the extent that she’d just picked him up and carried him indoors … and then messaged me.

Sunday tea time is not a great time to have a poorly cat. I phoned Vets Now and rushed down there with him. They were pleasant and professional but its not like having your own vet in a crisis.  Tippy was put on oxygen and a drip because he was so dehydrated.   It was explained that we had the option of him being put to sleep straight away ….. or £700+ for his care overnight, then pick him up at 7.30am to take him to our own vets and start tests to find out what was wrong and treat him.

Gulp ….. we had to give him a chance ……. but that’s 6 months fundraising blown in one night.

Towards bedtime the dreaded phone call came.  He’s not getting any better with the treatment they’re giving and is starting to suffer.  I can appreciate the policy … but it was agonising to have to go through this conversation with the vet, and then have to confirm it all over again with the nurse.   I was surprised / shocked / heartbroken that having given consent they put him to sleep and he died whilst I was still on the phone.   Needless to say ….. I didn’t sleep that night.

I’d planned to crack on with the decorating after work on Monday ….. but instead had to go back to Vets Now to collect Tippy’s body.  And instead of painting on my day off on Tuesday I went over to the crematorium in Doncaster.   It’s not the place you’d want to need to go to …. but having had the worst happen to a loved animal, its the best place to be.   Jody is so kind and understanding, and the fact that he’s a grubby stray cat made no difference to the care and concern she offered.

He’s home now … in a little black cat casket like our Sooty’s.  At some point while I’m decorating I’ll paint the tip of the tail white. 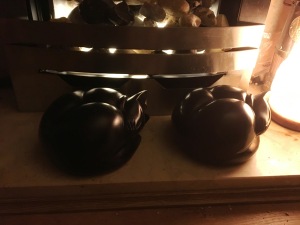