Posted on March 12, 2017 by accidental fosterer

In some ways it should be easier around here at the moment.  We’re down to only 7 cats, and all of them get along with each other … more or less.   There is the small matter of the building work though …… and a few other things …..

Day 1 of building work, the day after we brought Tippy’s ashes home, we were kind of ready for it and it was exciting.  By Day 2 I wanted to call it off.  I’d anticipated that the cats wouldn’t want to be in the kitchen right next to the noise and disruption, but hadn’t anticipated that the back door would be open much of the time, that it would be impossible to sneak between kitchen and lounge without cats getting through the door and hence outside under the diggers etc..  So then realised they would have to spend the time whilst the builders were here upstairs!  It’s not easy posting them all through the door at the bottom of the stairs without all the previously posted ones avalanching back down!  Even less easy doing it first thing in a morning with only one mug of caffeine on board.   The biggest challenge though is Amber, our semi feral cat.

Amber is loved to bits and has been settled here for years, but she’s not someone you can approach or touch … and most definitely not someone to be posted through the door at the bottom of the stairs.  I’ve learned to keep a look out for her and avoid walking towards her.   On the rare occasions I fail she goes into panic mode and cries pitifully with fear.  Rather than put  her through this I’ve taken to getting up in the middle of the night whilst she’s sleeping in my bedroom and  close the door at the bottom of the stairs so that she won’t go down.   We’re into week 3 of 7 with the building work now and so far so good with that one. 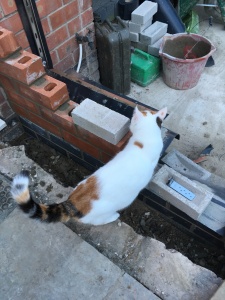 It helps that the nights are getting lighter and there’s a little time to go outside after the builders have left and before it goes dark.  I’m not entirely sure how the builder’s would manage without Honey checking that everything is straight and in order.

Meanwhile the decorating indoors chugs along.  The little front bedroom is finished 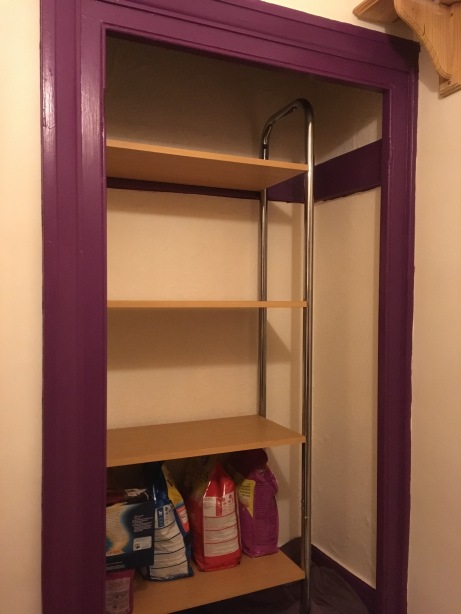 and the back bedroom started.  It’s not great to have disruption indoors as well as outdoors but I’m anxious to get it all over in one fell swoop …. and it will be kitten season by the time the builders are finished so the rooms will be desperately needed.   It’s rare to have an opportunity to be able to move freely from one room to another without needing to keep cats behind each door.

I’d hoped after Tippy the worry and upset would be over for a while.  Sadly it isn’t.  I spent most of last weekend with an old friend and her very poorly cat, trying hard to make things better for him but eventually having to say goodbye to him early this week.   At the same time persuading Jenson to pooh into a pot in the hope of getting to the bottom (lol) of his tummy upset.   He’s managed to combine this with sending me out to check a family he thought he’d like to live with.   I’m delighted that he’s found the people he wants to spend furever with …. we just need to get his tummy fixed first.

Jenson has a home!

Then Jasper messaged us to say that life in his new home wasn’t working out for him and could he come back. It’s the first time this has happened and we’ve needed to take a cat back. I’m sure if he’d known how things were around here he’d never have asked! Thankfully though, since Daisy Mae had struck gold within a few days of being in her foster home, and gone off to her happy ever after, there was a foster space.

Then …. and on a selfish level so much worse than anything else …… our little Rufus is poorly. He’d been a bit hissy and growly and I’d put it down to stress of building work and of Jenson being a bit hyper and annoying with his random pouncing on people. Then realised Ru was growling at nothing in particular and his ears were hot. So off to the vets to find he has a raging temperature, sore gums and we don’t quite know what’s wrong. He’s had antibiotics and is on daily metacam. I’m managing to get him to eat and he’s alert. However he’s spending most of his time in bed at the moment and when he gets up he’s growling and hissing again. Clearly something is hurting. 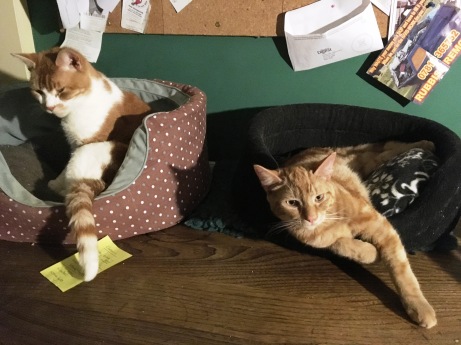 Just to add that extra frisson of excitement …. Henderson (now as well as we could have hoped he could be) is plodding around the house randomly peeing/spraying. Sometimes we confine him to his crate to stop it, sometimes he follow him around escalating the tension, sometimes we just give up and go with with the flow (ahem). There’s no escaping the fact that he’s a lovely old boy.