Now we are Six

Posted on March 18, 2017 by accidental fosterer

……… technically Seven I suppose if you count me … but mostly we don’t .

We’ve approached 6 from both directions:

Up from 5: Henderson has officially joined the ranks of our permanent residents. He’s so much better than he was when he arrived with us but he’s very elderly, not entirely well and has some behavioural issues. Not easy to imagine anyone wanting to sign up to adopt him. Having said that, he’s adorable in many ways – he loves his cuddles and rubs along reasonably well with the other cats.

Uncertain as to whether he’s giving thanks or praying for deliverance. Mostly he seems to be making the best of it though: 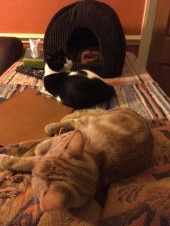 Down from 7: Jenson has gone to a foster home amidst sighs of relief from the other residents. He met the family he wants to live with last weekend, but we’re not happy with him being officially adopted until we’re sure he’s fully recovered, so he’s gone there on a foster basis. It was lovely to watch him playing with the human kittens there. They’re as boisterous and crazy as he is so we’ve every hope he’ll fit right in. He certainly got a warmer welcome than he gets from our adult residents when they’re trying to sleep and he wants to re enact scenes of bringing down wildebeest on African grasslands.

We’re hoping we’re about half way through the building work now, but less than half way through the decorating. It’s going to be a little while still until we’re able to admit any more cats however unlike A.A.Milne’s young character I don’t think we’ll be six for ever and ever.